Backer is back from injury and was scheduled to play against the Bears Saturday. Anyone see that game ?

Nb Hillfan you had a wrap on Faimu, what’s the latest there?

He went alright. For a first game back from injury it was fine.

I wouldn’t see him cracking into first grade in the near future though.

UPDATE: I added the full replay of the NSW Cup match on Facebook Live below. Panthers fight back to beat the Bears

The NSW Cup Panthers continue their winning ways after coming from behind to beat North Sydney Bears at BlueBet Stadium on Saturday. 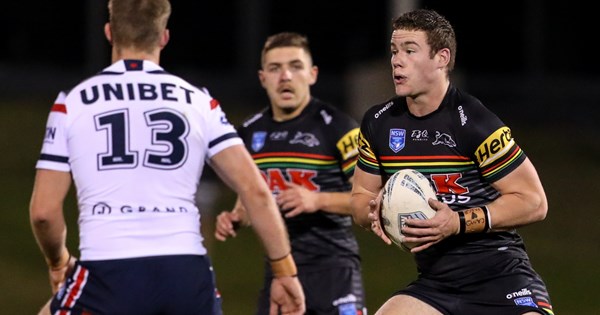 The Jersey Flegg Panthers paid the price for a slow start after settling for a draw with Sydney Roosters at BlueBet Stadium on Friday.

that being said i was glad not to see Eisenhuth and just don’t think he adds anything to our squad, his doesn’t shift the tempo through attack or defence and offers no more than just a big slow body on the field.

Lenui went a little better but he needs to think about playing the ball instead of always whining about the tackler making him lose the ball.

Cant see May having anymore to add to the side as well.

Crichton still has issues, he passed way too early as in his first opportunity and his lost balls in taking the ball up in the 2nd half would have hurt us against the Storm…he just lacks commitment and is poor at decision making when ball is in hand.

Kid has something but he needs to begin to show it.

Its good to have player options and maybe we are spoilt now especially by the SOO players, but its not a bad benchmark for us to maintain and others to strive for in the club.

100% agree with the Eisenhuth comments…

I am willing to cut Critter a fair bit of slack, he has been our go to for gap fill and hasn’t been able to make a spot “his own” all season. The positive is it has allowed us to find Burto’s worth in the centres also. Other than Kikau, I don’t see any need to change and you would have Kenny as 14th man every day of the week in front of May…BUT is he as close to NC?

Just on Liam Martin, that effort when NC kicked from half way to tackle the chooks winger in goal should be in every video session for the rest of the season…including opposition teams. THAT effort IS selfless and about the TEAM. Note: He didn’t even make the tackle, what he did do was stop the winger in his tracks which then allowed the others to form the defensive line and stop him in goal. THIS was my game highlight.

I waited to watch the other games on the weekend before posting.

Was our performance in the wet & wind against a team who will be in the top 6, after trailing by 12 & overcoming the Klein clown, better than the $torm who won on a fast track beating a team who will not be in the 8 & who are already are on their end of season trip after winning THEIR GF two weeks ago. I think so.

I suggest we were very good & that we saw again why some players get paid more (a lot more) than others. As others have commented, that team is our best 17 except for the inclusion of Kikau & I think a lot of questions re our best 17 have been answered in the last 3 weeks.

Watching the game, even though the chooks got off to a flier, we just play the game faster than pretty well all the other teams. The better teams ask more questions, sustain more pressure and punish the other teams with their defence & we tick those boxes.

NC is playing a different game to the other halves in the game & the team as a group are working their arses off.

A measure of our performance was that I didn’t give Fish a vote even though he was fantastic. Best were NC, Martin & Yeo.

Agreed on Liam Martin. For me, that was evident when I first noticed him in reserves a few years back. On Matt Eisenhuth - he strikes me as a typical old fashioned rugby union second rower.

The ironic thing about Martin is that as good as that chase and successful push of the rooster to get him to stumble and the defense catch up, it was recorded as a missed tackle.

He showed 8 missed tackles in the NRL stats, yet watching the replay I saw not a single one. They were what I would call either “tackle assists” or cases where he drops off knowing the other tacklers have him under control.

Goes to show you can’t always trust stats, I stick by my original observation from the game that Martin was awesome.

Hence the reason I despise the Aaron Woods of the rugby league world, NEVER takes the first hit up and is usually the 4th or 5th tackle of the set, busted defense, make metres, but I would assume he does that for the ‘quick play the ball’ to allow his kicker time

Then you have the tackles made, he is NEVER the first contact and in 99% of cases he is 3rd man flop, straight out of the Hindy textbook.

So I 100% agree SHF, keep your stats, I watch and rate a performance with my own eyes.