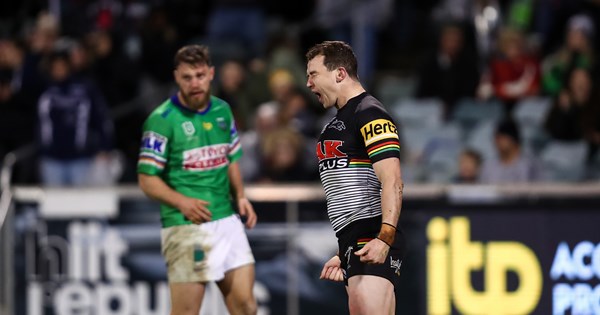 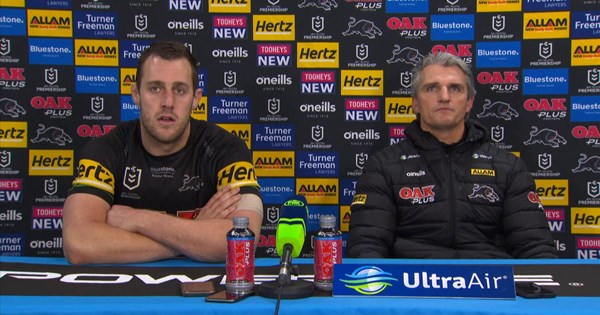 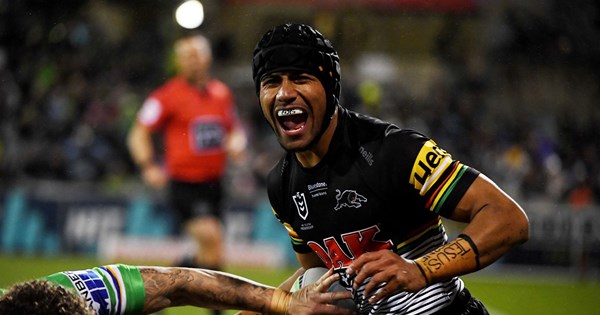 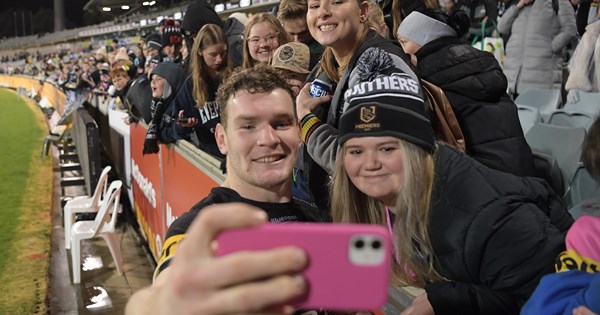 See the best snaps from the Panthers big victory over the Raiders in Canberra. 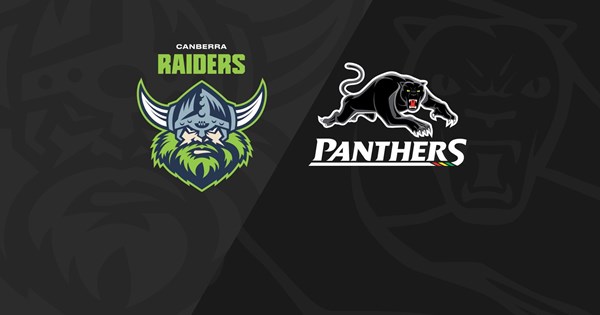 Teams and Match Officials have been updated. 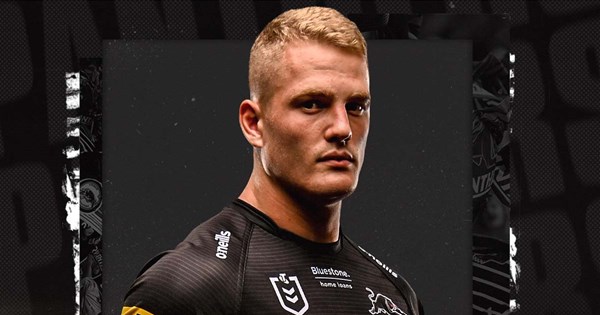 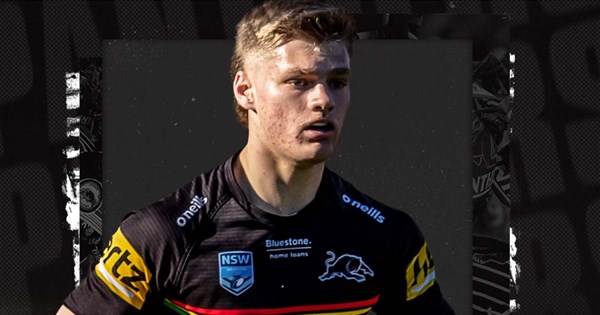 Falls at 7 in reggies…must rate Salmon as a half. I haven’t seen it yet but happy to be entertained with his capabilities this weekend, will be a brutal game i reckon, maybe he has been selected defensively.

Is Falls to #6, Salmon to bench and Staines to drop a potential late change?

Not sure why Salmon would be ahead of Falls assuming fitness is OK, but then both teams are playing the same day.

Staines on the bench (again) is an interesting one. I thought last week was to cover Kenny (was surprised it was Soni), but perhaps not.

Will leave it with the coach.

I’m not sure if Falls will lineup… I’m sure they will give him to game day to prove his fitness. The bruise he had suffered wasn’t pretty, and it does take some time to recover.

Salmon is a more than capable replacement, what he lacks in attack he more than makes up for in defence, if this match comes down to a grind, he will be up for the challenge.

We just need to keep in mind… just 2 or 3 more wins and we lock away the minor premiership. That’s it.

As much as i love falls, i think Mini Fish is a better overall player, and has filled in marvelously in multiple positions this year. He’s the 22’ version of Tyrone May, who Ivan picked religiously. I would love to see Turuva get a crack somewhere in the side.

Turuva set for his debut this weekend off the bench.

Kikau is being rested , with Chris Smith taking his place.

this’ll be a tough match up with or without Cleary and Luai ,always is in Canberra. Kikau’'s absence sure don’t help. Fingers crossed our blokes do us proud.

Thats interesting news about Kikau being rested.
I personally wouldn’t have Staines anywhere near the top 20 and don’t see what he could or would add in any position.
On salmon, i am not sure he has the passing game to be at 6, he seems ok to come off the bench but to play 80 at 6 i believe is a big ask. Maybe Kenny at 6 with Salmon on the bench could be a better option, he can pass and defend and has some short distance speed.

Raiders will be up for this on so many levels, we might all recall how we mocked the Viking clap, plus how we humiliated them in the 2nd half with brutal defence last game at home.

Stuart will not have to do much to motivate them, indeed i feel his task will be for them to measure what they do so they don’t blow themselves out too early.

Cleary on the other hand has to get the team to think for themselves without the guidance of Nathan and hopefully SOS lifts because he went missing when Cleary went off last week.

I don’t share the view we can accept some losses and limp toward a minor premiership…to me the team who takes the field have to have the belief and understanding this could be the side which goes into the finals…who is to say Laui returns fit and ready and indeed if even Nathan comes back 100% ready physically and mentally.

I hope they do but we have to believe who we are putting out on the park will be good enough to win the comp.

If we feel we cannot win missing 2 key players we are in real trouble. I know they are both super players but Cleary (Ivan) could argue to his squad what if Nathan is sent off again or Luai is hurt in a game…its not about waiting for them to come back, its about this team getting the job done.
we might learn more about the squad without Nathan and Luai and the team may learn more about themselves which will be a great outcome.

this game is full of errors from both sides. Whoever holds on to the damn ball could go on with it. It’s awful.

Happy with our effort, even if execution hasn’t been the best.

I think the JFH sin bin was a bit soft, penalty at best. I think we learned a lot from last week, and it has helped us while a man short.

Hoping Edwards isn’t injured, he has probably been our best so far.

2 weeks in a row having to play with 12 albeit only for 10 but we responded better this time.

I doubt the JFH hit was worthy of the bin as well as report and how about the Rapana “trip” and his shoulder charge on Edwards?

Its rugged and conditions are not helping for an open fast game but will suite likes of Api.

if Edwards is off we call for a reshuffle.

Crichton to FB and Salmon to centre with Kenny to 6?

Edwards back out there, we will see how he goes. Mightn’t have been much. Might be worth testing him in the back end if we get a decent lead (not that I’m expecting it)

I think Cotric’s shot on Edwards might have been worth a bit more than 10!!!

Or possibly Chricton fullback, Turuva wing, May or To’o to centre.

Panthers second half was light years ahead of the first half. Our team are amazing.
You know Cleary could ask for volunteers at the club and they’d still give a good account of themselves.

Ricky Stuart, he needs to look for a new job. !

Great effort without 3 of our biggest names. Hopefully this will silence the naysayers.

Kudos to Edwards in particular. He took a lot of punishment, lasted the 80 & was close to, if not our best.