PREVIEW
Coach Anthony Griffin has made a few changes after a shocking loss against the Broncos last week. Tyrone Peachey has been named at Fullback and Dallin Watene-Zelezniak return from injury back on the wing, see Christian Crichton dropped from the starting squad. The squad will be looking to put in a good showing against the struggling Sea Eagles and straighten the ship towards the finals. 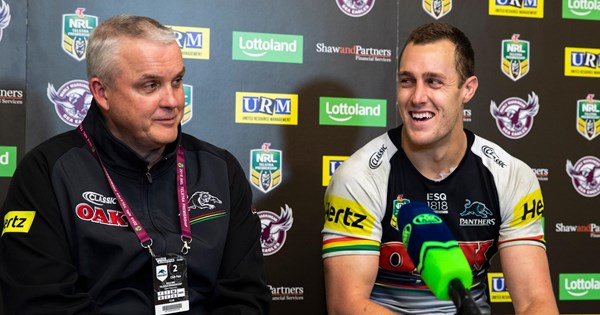 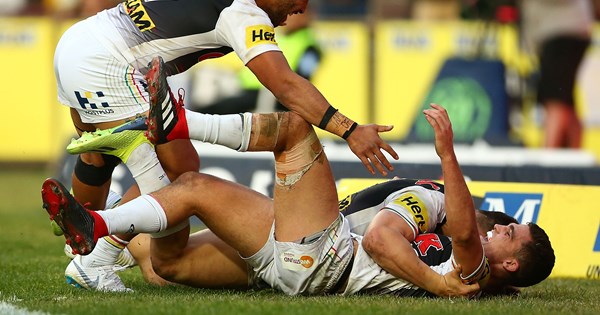 The Panthers produced a comeback for the ages at Lottoland on Saturday afternoon, bouncing back from an 18-point deficit to defeat Manly Sea Eagles 28-24.

MATCH REPORT
Not Yet Available 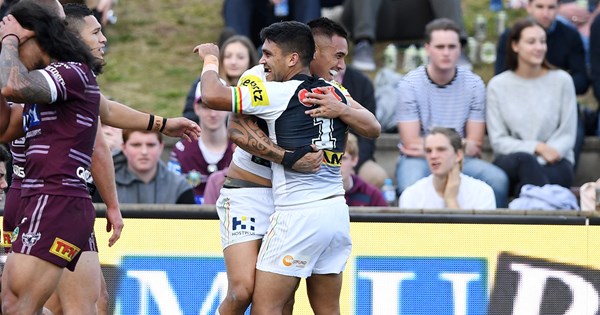 Penrith Panthers fight back from being 18 points behind to beat Manly Warringah Sea Eagles 28-24.

The key to this game is breaking their backs early. They are that far gone that if it’s 12 nil after 15 minutes they will fold. On the flip side, if they get early ascendancy with a no holds bar attitude, we could be in for a tough day.

The first forward stint is crucial for us, no surprise we have put JFH at starting prop, grunt through the middle. No good obviously if Tamou doesn’t step it up as well. Merrin, for all his quality just doesn’t have the impact early, he can win you games through being top notch consistent, but we need to break these blokes early so i think it’s a smart move by Hook.

Interesting selections this week, could have been even moreso if Luai wasn’t injured. Expect some shuffling, with Peachey not playing 80’ at FB, but providing some sadly missing x factor. DWZ was in great form before the injury and provided some thrust from FB and will be supplemented with Sauce’s power.

The dogs were barking about Merrin’s form & his moving to bench was not surprising, being mostly below par for some time & getting less and less minutes.

Not sure what our best backline would be, and what role May will play if he makes the final 17.

Need a win badly and then hopefully RCG back next week.

I would expect if playing, May would be used at hooker to relieve Katoa, if not a a roving forward/ 5/8 role similar to Peachey when he has on from the bench.

Peachey at fullback worries the hell out of me, I don’t know if he’s ever played there. I hope it’s a smokescreen & DWZ goes to the back with Whare or Blake on the wing - not that that’s ideal either.

Had some shit at work today, so sorry for being negative. Hopefully things will look much better about 5pm on Sat arvo.

Peachey at fullback worries the hell out of me, I don’t know if he’s ever played there.

I can’t recall him ever starting at fullback with us, but he has filled in there one or two games due to mid-game injury.

From recollection, he also played a fair few games at fullback for the sharks (as well as at hooker).

Like most players filling in at fullback, I have little concern for his attack, or even returning/ receiving kicks, but his goal line defensive positioning will no doubt be tested.

That’s what caught leui out last week (while he was on the field), and while DWZ was improving in that regard, he was still no where the defensive fullback as Edwards.

I can see why Hook did this - we needed DWZ back on the wing or we were going to leak tries for the remainder of the season, as teams had worked out the liability of our reserve grade winger (s).

Might be a Salary cap issue why we couldn’t use Aitken, after all Peachey, DWZ and May are all in our top 25, Aitken is not.

I’m not fazed in the slightest with Peach at the back. I would rather Peach than Whare. A fullback needs to be a “footballer” they see things structured players like Whare don’t.

I was surprised at how bad Luai was reading the game from the back, he was out of position almost all game it seemed…while he was on the field.

The beauty of it is, we have DWZ to cover if necessary and talent who can cover the wing, Crichton is not there which alleviates that shortfall.

At the end of the day, if we dominate the Manly pack early, the rest will take care of itself.

How the hell did we get out of that one?

it was Manly mutley and they’re doin it tough.
We demonstrate that lethargy against top 4,
we get lapped.

This is the reason I usually refrain from commenting about a game until its over. You know Penrith are going to have a crack at it with 15-20 minutes left on the clock.

On the game itself, it was pretty terrible to be honest, the team looked a bit lost out there and were not moving forward, it looked like Manly had all the right answers and there was little Penrith could do to stop the momentum. But the fade late in the game from manly opened a small gap and Penrith capitalized. The only positive take away from all of this (apart from the 2 points of course) was they didn’t die wondering out there and they stuck to it all the way to the end, even when the odds were slim (I head on Fox the comeback is a record in the modern NRL era).

Work needs to be done, that’s a given, but I was pleased with the teams resolve, that gave me cause to crack a smile at Full Time.

By the way, interesting stat for you… Ben Cummins in the middle with the whistle in 2018 for Panthers, 80% win rate, how about that? 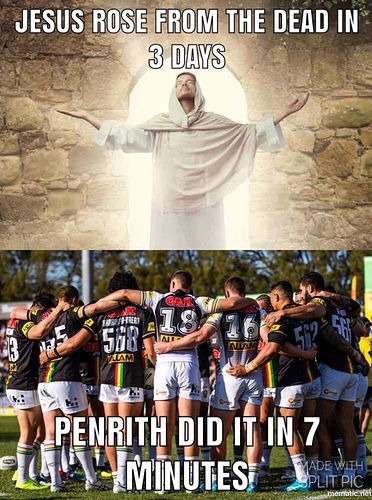 I haven’t seen the game, was working yesterday arvo til 7. Will try to watch the nrl.com replay this week.

How did Peachey go? If he killed, it, I’m very happy to eat humble pie!

Hope we can kick on from here & get back to real form against the Raiders next week.

Peachey was good, but I would still prefer DWZ there.

I still like DWZ as well, but I haven’t seen the game. I’m glad Peachey did well. Thank you.

Was driving to Tamworth yesterday, so didn’t see the game, but listened on radio.

Hopefully this miracle win give us the confidence we need in th coming weeks.

But gee, from the description we played awfull the first 67 minutes.

Peachey seemed to handle fullback ok from all accounts.

What is it with Kikau getting his second wind in the last 10 minutes? Not the first time this year, and wow.

Not much more I can add having not seen the game, left me flabbergasted to be sure.

The first 10 minutes were good, we hit the line hard and we were solid in defense but couldn’t crack their line which was a concern. Then, they were coming out of their end again, 4th tackle another 2 bob penalty that gave them momentum…57 minutes later we started playing footy again!

I commented to a mate that CHN looked like he was on the Kava before the game, he was in no mans land on more than 1 occasion and was running around like a chook with his head cut off. DWZ handling early was horrible and I was glad Peach was at the back. Whare could have scored a couple of times but threw stupid 1 handed flicks to the touchy. Tamou was a shadow of his normal ability, it was almost like they were all waiting for the bloke next to them to do something, no cohesion at all.

Gotta say though, the end result made the drive home alot better lol - Unlike our old mate Teach who left the ground with the shits at 24-6 down, poor bugger was stressing out.

Also, just gotta say, some of our fans are fools. No wonder the riff gets a bad wrap, absolute nonsense being yelled out with no real idea of what they are saying, it was embarrassing and I ended up saying something to one bloke just to shut him up…

Unlike our old mate Teach who left the ground with the shits at 24-6 down, poor bugger was stressing out.

I get it completely. There was nothing to keep a person watching it (although the end was pretty special), it was a frustrating game to watch. You know what the team is capable of, we have seen it many times this year, and against a team which are goners this year it was painful to see nothing stick and at times devoid of a plan. I was only Manly’s total capitulation that resulted in the win for the team.

The last game I remember walking away was down in Canberra in 2008. We were getting pumped and we were down by about 40 points, my hands were numb (it was sleeting in the earlier grades game), I was freezing my arse off, and I had enough, I stormed out of the place and started the trip back home in Penrith. Turned out to be a good call, we lost 74-12.

But if somebody told me they walked out on that game on the weekend, I completely get it. We could do better.

Its funny, the bloke i ‘aced up’ for bad mouthing our team, we ended up high fiving at the end at which time he apologised lol. Some people are fans, some people are passionate and some are fanatics, all are good but require an ounce of common sense when your team is playing poorly.

I’m not so sure we were so bad in the 1st half. We had chances to score down the right but took the wrong option twice. Letting Manly score right on half-time meant that we gave them a chance, when we should have had a bigger lead at the break. Some poor defence (again with players dropping off tackles - what is happening there?) and a freak bounce suddenly saw us literally gone!

Concerted attack on our left with Billy, Waqa & Sauce, combined with Cleary switching to that side saw us run in 3 in quick succession. By then Manly were rattled and then the wonderboy lost the ball in Billy’s tackle & we hit the front.

Need more potency on the right & with RCG back this week in the middle, it is all there for us to make a run at it. Was happy with Peachey, buy i think DWZ at FB is our best option, so perhaps Peach to R/C and Whare to wing might be the answer - he likes passing it to the linesman anyway