PREVIEW
The NRL regular season comes to a close this week, and the Panthers face competition leaders the Melbourne Storm. This game will have a great effect over where the Panthers finish in the top 8, anywhere from 4th to 8th are up for grabs this week.

The Panthers welcome James Maloney back from injury, a important addition as the past few week without his guidance has not yielded a good result. This will be the Panthers last change to stamp their authority on the competition before the finals and they will be out to make amends for their dismal performance over the past few weeks.

The ISP and Jersey Flegg teams will also play their first finals match for the 2018 season at Panthers stadium on Saturday. Both sides finished in the top 4 and a win would see them in a grand final qualifier. Be sure to head out there on Saturday. Panthers 2018 Members get free entry, and $10 for Non-Members. 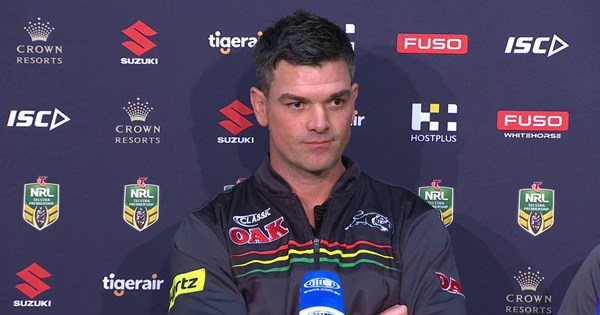 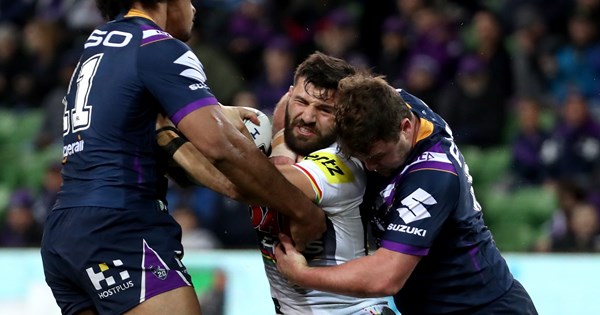 The Penrith Panthers are within touching distance of a home final following a 22-16 win over a depleted Melbourne Storm side at AAMI Park on Friday night. 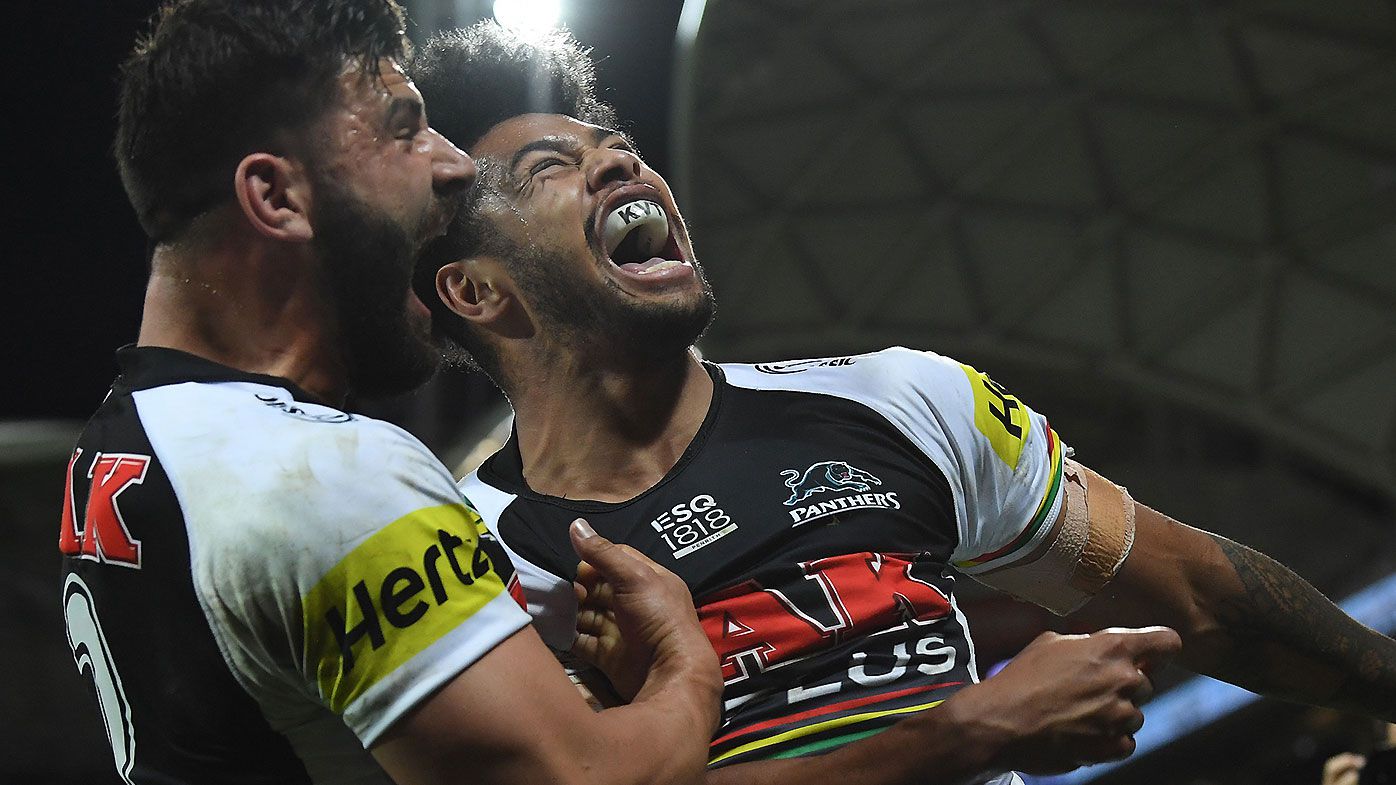 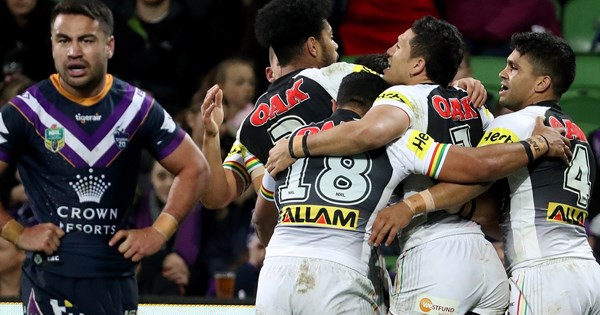 Doubles from Josh Mansour and Waqa Blake have led the Penrith Panthers to a 22-16 win over the Melbourne Storm at AAMI Park, their first in Melbourne since 2005.

Munster & Croft have both pulled out with knee injuries. Will be interesting to see how the Storm line up, given they have already lost Slater & Vete, with Hoffman also under an injury cloud. They should be ripe for the plucking if we are switched on.

2 things are going to happen, this scenario will play us back into form, ie the boys will realise they are ripe for the picking and play accordingly, or we will produce the same as last week and we won’t win another game. Pressure is on!

It must be difficult for opponents to prepare for a meeting with
our Panthers. Expect the unexpected they’d be reminded. A task
easier said than done. So, how do you rate a performance against
a depleted Storm in Melbourne with a lop sided penalty count against
our blokes, with only twelve men on the field for most of the first half and
an off night with the boot for Cleary?

This, if Panthers ever put it together they’ll be a mighty difficult assignment
for any opponent come finals time. But which Panther side will show up?
It’s up to them now, not Ciraldo, not Gould. Perhaps a pinch of self belief,
a smidgeon of patience, a dose of discipline, an unbridled unity. Not too
much to expect is it ???

well put Puss because even last night despite the opportunity to play a depleted Storm side we did all we could to lose the game yet somehow got the win.
Add to this 2 sin bins when playing Storm in Melbourne you are all but giving the game away.
Add in Cleary missing difficult kicks Maloney still being caught out in defence yet absolute moments of brilliance like the Cleary kick for Blake, the Kikau pass to Blake and the Crichton intercept
There were some areas to be excited and that was in the forwards effort…who actually outmuscled the Storm forwards and return to form of Mansour with Crichton looking right at home as was DWZ

It was a win which gives us fans hope and now looks like we have set up a home final against Broncos for the first week of the finals.

There is nothing Ciraldo can do now with the playing group except have them believe in themselves and we got a glimpse last night albeit it was clunky and ugly at times but gees the brilliance from this group gets you out of your seat.

One thing I do know, Tony Archer needs to send a letter of apology to Ciraldo for that disgraceful refereeing performance. Not since that infamous Broncos/ Titans semi final have I seen such one sided officiating.
Credit where it’s due, a very brave effort considering what was happening out there. I know storm were missing key players but we certainly werent full strength. Hopefully a home semi next week even though it’s at ANZ.

Very happy to take the win, and should be a confidence boost for next week. But, geez, there’s a lot of improvement left. The Storm really carved up our edges more than a few times and were very unlucky not to score at least 2 more tries - I thought their disallowed try for obstruction was ok, and if Crighton hadn’t snaffled that intercept try, we’d have been cooked down our right edge. That was a 10 point turnaround.

But, the team showed a lot of spirit to win with 40% of the ball and the forwards muscled up like they haven’t done for weeks. Hopefully Maloney is right when he said it’s a good springboard into next week where we’ll show our best form.

The Intrust Super Premiership (NSW Cup) side has beaten the Canterbury Bankstown Bulldogs 28-18 to get the week off and is one game away from the Grand Final. Scorecard is at the top of this thread.

Also the Jersey Flegg Cup side has just beaten the Cronulla Sutherland Sharks 18-10 to get a week off also and is one game away from the Grand Final. Scorecard is at the top of this thread.

Both side are just 2 games away from Premiership glory.

It has been confirmed that the Penrith Panthers will play the New Zealand Warriors at ANZ Stadium on 9th September at 5:30pm

The key for me was the aggression early and the fact they maintained it. We need to ramp that effort up by about 20% early and we will kill the warriors. If by chance the warriors get a sniff of us not being at our best, they will cut loose.

Here’s hoping for a fair refereeing display in the finals.

Note: If Penrith had that try disallowed like the storm, we would all be blowing up, that was a ridiculous call of shepherd!!