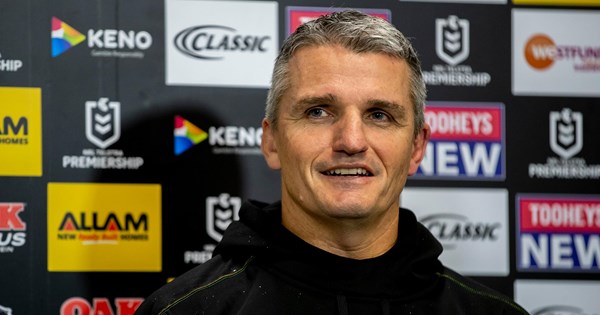 Panthers scrap their way to victory over Gold Coast

The Panthers have entered the top eight for the first time this year after outclassing the Titans 24-2 at Panthers Stadium on Friday night. Panthers too good for Titans in sixth straight win

The Penrith Panthers have made it six wins on the trot and moved into the NRL top eight with a 24-2 win over Gold Coast at Panthers Stadium on Friday night. 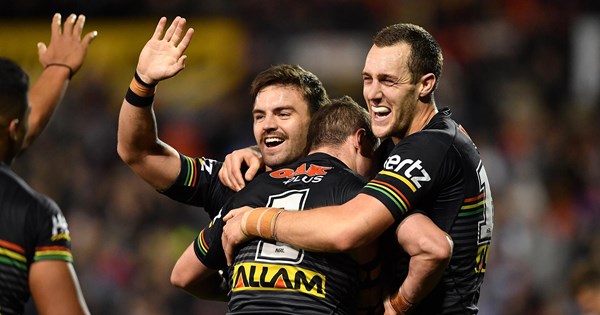 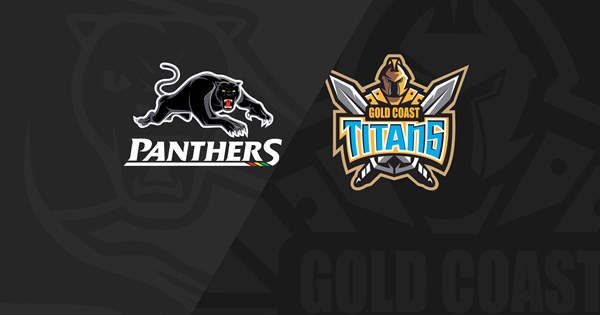 MAN OF THE MATCH VOTING

Vote for your Round 17 v Titans Man of the Match Penrith Panthers 24 Tries Brian To’o (2), Dylan Edwards (2) Goals James Maloney (4/6) Gold Coast Titans 2 Tries None Goals Tyrone Roberts (1/1)) Who are your votes for this weeks Man of the Match? (Please select 3 players) poll

The video ref is the one who let the Burgess eye gouge and the Parra swinging arm go without penalty. Sitting next to Beau Scott…

Another must-win game. 6pm time slot is dreadful, but i will still be able to make it thankfully. This is an extremely important game in the context of our season. If we win, we will be back to 8-8. It really will let us start over in a sense. If you win more games than you lose, generally you make finals.

There is a decent chance Cleary won’t play tonight, which could put a lot of pressure on Jimmy who is backing up from origin.

I’m very nervous for this one, particular with us coming up against former Panthers players.

We need to start well, and kick long. Make sure that the Titans don’t get an early sniff.

Yer but we owe em for earlier in the year…

like Luai, he plays instinctively. Not a try for the purists perhaps,
but the Titans weren’t sure what he was doing on the Edwards touchdown.
It was a long time coming however, we need to take our chances.

our attack looked better second half. Luai and Maloney
display different styles, gives us options, them headaches.
No bigger headache than the selection dilemma Ivan has.

Just got back from the game - my first ever 6pm Friday.

All in all, while it wasn’t a high standard game, we could only play what was in front of us, and won well.

Hats off to Jimmy for backing up like that 48hrs after origin, and I can’t remember the last time I saw a line drop out find touch.

Referring was woeful as to be expected, yet we didn’t let it get us down.

Everyone put in a good performance, and we will certainly take all important confidence into the Dragons game.

Things go our way with other results (likely), and we will finish the round in 8th spot. Win next week and we be making a run at top 4.

Who’d a thought it 8 weeks ago?

I am not sure about Luai and i am sure other good teams will work out his “step” and clean him up but gees i wish he would run straight but he has something.

It was great to get the points and i believe we have a few in a row now at home which should help recovery and getting ready for games.

agree with you SHF…whod a thunk it!

Vote for your Round 17 v Titans Man of the Match Penrith Panthers 24 Tries Brian To’o (2), Dylan Edwards (2) Goals James Maloney (4/6) Gold Coast Titans 2 Tries None Goals Tyrone Roberts (1/1)) Who are your votes for this weeks Man of the Match? (Please select 3 players) poll

6pm time slot is dreadful, but i will still be able to make it thankfully.

I agree. We barely made it there as the ball was been kicked off, with a stream a people still arriving up to about the 15 minute mark.

That time slot really does not work, especially in Penrith, and the crowd was evidence of that, falling short of 10,000. Made up of a few factors.

To be honest the NRL should think about dropping the 6:00pm Friday Slot and maybe bringing back a 7:30pm Monday slot.

Agree about the Friday 6pm timeslot, especially in Penrith, but I think Sunday 6pm would be a better move than a Monday night game where people are still rushing to get out to the game after work.

Doesn’t the NRL already do a 6pm Sunday slot?

Only a few times a year, usually the week after a Wednesday night SOO & a few times early in the season.

Unfortunately the timing of games does not take into account common sense, only what foxtel demands.

It’s like most of the draw and the scheduling;
Channel 9 first
Foxtel second

steamboat, I say let Luai play his natural game.
We already have a Maloney ‘clone’ in NC and
once Jimmy decides to move on or hang up his
boots, the variety will be delicious. Aren’t two try
assists sufficient for you?

you just said it all…let Luai play his natural game

I don’t see anyone except for Edwards who has in our team.

Luai has something…just maybe its not fully understood by us all yet and i personally don’t share your view NC is a Maloney clone…for one Cleary can defend and has more options in attack, just we haven’t seen the latter as yet IMO

Now if you said Luai was a Munster clone…then i would be excited because that kids does have the magic and knows what to do with it.

Not saying Luai will not be like him but i haven’t see how Luai fits into a “team” effort just yet.

… so long as the ‘natural’ ability isn’t coached out of him.