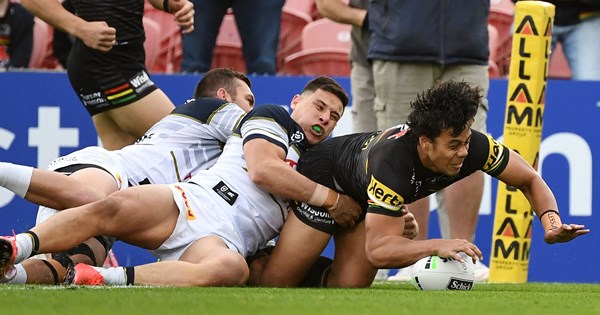 The Panthers took top spot on the NRL ladder with a 22-10 comeback win over the Cowboys in their long-awaited return to Panthers Stadium. 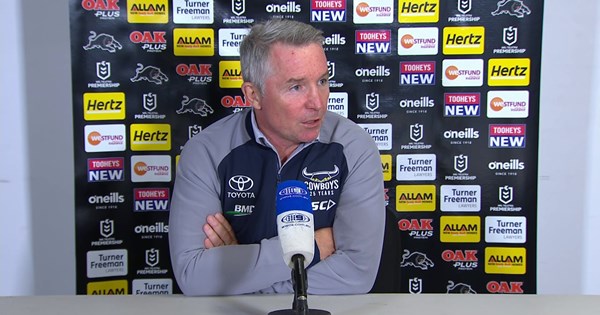 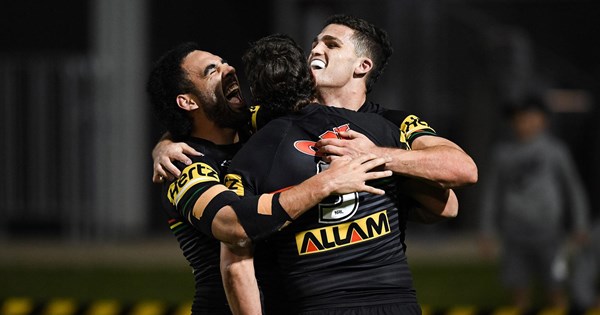 Anyone know much about Lindsay Smith?

Local St Marys junior - club must have a big wrap on him to sign him on so young. Most props take till around 24 to develop.

According to the bookies we can’t lose. But then I say the name ‘Cummins’ and everything changed.

You will get double figures if you mention his overall record and the fact we have already won one this year with him in charge…….we’re stuffed this week

Well Ashley Klein has the record for the worst win ratio for the Panthers, but we piled 50 on the Sharks with Ashley behind the whistle last week, and beat the Storm with him in charge as well.

Cummins has had one game with us this year, and it was the draw against the Knights. I think we will be okay. I feel the Panthers has found a way past referee voodoos this year.

I agree Steve, we are playing “what’s in front of us” and if that is a 6 again on the 4th, we just man up and keep tackling.

In the past, we have dropped our bundles with bad calls, this year we get on with it. That is great coaching.

Proof was in Tamou send off, he was not the culprit but he just jogged off and we got on with the game.

Right. The team used to have a culture of letting bad decisions and momentum flows get under their skin and derail the game plan, resulting in some terrible ad-hoc play resulting in conceding points.

This year they are sticking to the task, make those tackles, gain field advantage, and stick to the plan. The telling game was the one against the Tigers.

The Tigers did everything they could to just get under the Panthers skin, pushing in the play the ball, milking, baiting the refs, making gestures and remarks, and being general grubs. But we didn’t let it get to us. We completed our sets and stuck to the plan, and in the end it was the Tigers who cracked under the pressure.

A trend I hope becomes a mainstay at the Panthers.

Todays weather should provide a quick track for both teams .
Just hope our boys do not think about where we will be if we win this game on the ladder, getting the result in our favour will let the ladder look after itself.
Cowboys will be dangerous today IMO, they and the coach are under a lot of pressure and teams can respond in 1 of 2 ways and we have already seen some upsets and results be determined in the last few minutes this week.
Not happy about Whare but with the young kid Staines being in lockdown, it followed Whare would come into the squad.
If we continue with our recent form, we should win.

Well, looking at the ladder, with the Eels loss, we have the chance to take the number one spot at the halfway point of the season and make a run for the top 4.

Cowboys are in deep trouble. With key playmakers out their attack will be found wanting, but their defense should be strong should they be in the right mindset.

Hopefully we have learnt and had drum into us to play for 80 minutes and not relax against any team. Always respect the opposition.

Do this and as our season to date has shown, we can beat anybody.

we’re flat as a tack. Whare for man of the match and he’s in the sheds.
Ya gotta do more than just arrive at the ground on time to get the bikkies. Still time to turn it around, but they need to pull their collective fingers out.
Hess late on Cleary early has been eating at NC far too long, you’re all square now with assistance from Martin, get on with your job tough guy. Where was Cummins on that late shot early by the way.

my my, Cleary stepped up and won it with defence and attack
It was an ugly win but you need to get these done in a long season
Hope Edwards is nothing serious and we need to sort out the Whare position and BURNS is NOT the answer
In fact i thought Burns was our worst today and Burton surely has to be considered for the bench
The good news is thats about as bad as we can play and we get the win, nothing good to take out of it at all except if they had Cleary they would have won.

Better 2nd half but we still played some dumb football at times.
Kevin, I like my half backs to take the line on not line up as an enforcer.
No harm done touchwood and Cleary finished them off in the end.
We should learn from that hit out, but the injuries are starting to mount (Whare,Edwards) so our depth will be tested with a lot of footy remaining.

Yep, I’ve said it before and I’ll say it again ; Burns is more a liability than an asset. Three penalties, all at crucial times, plus a hail Mary pass that wasn’t needed. He doesn’t appear to have much going on up top, judging by his decision making.

Very lacklustre effort, but we did enough to win. Luckily we were playing a mediocre team, who were down on troops. Hopefully Cleary Snr makes them do a few extra laps this week.

I think we are not giving the Cowboys enough credit here, they had a game plan and tried to take cleary out of the game, same as we did with JT, anyone know how many mtrs JT ran for, it wouldn’t have been close to his average of 218…we did great job on him.

After we scored the first try, it was like we were just trying to wear them down, rather than beat them. They played the best I have seen them play this season so credit were credit is due. What we believe should have been easy, someone had one hand on our duds trying to pull them down. We managed to keep our strides on and get away with that one…BUT we need to make sure the draw string is done up really tight in future so this doesn’t happen again.

Puss, I like a half who can take the line on as well, also one who can defend without the need for assistance too, no turnstiles please. I think that battle was great, Hess had a job to do, tried very hard to complete the task set but our little bloke stood up when it counted. Great learnings all round.

The natural order of (my) life is restored

Edit : Is it a co-incidence they aimed up, knowing this was their coach’s last game !

It was nice to get out to the game yesterday, though I must say the atmosphere was weird and I do hope we can get back to full crowds in the near future.

On the game itself, it was a bit of a mixed bag, we seems to get a bit complacent at times and gave the Cowboys many opportunities where we should have shut them out.

The Cowboys looked pretty good for most of the game, much improved performance from them, and they were out to make a point, so I wasn’t too disheartened by the final score line. Looking at some of the Cowboys stats over the last 10 weeks, they did better than their average this season, mostly in the Line breaks and tackle breaks department.

There is a lot to learn from last nights game, I am sure the Titans will be reviewing the tape of this one and trying to take advantage of the lapses we had.

At the game, it always felt we had the cowboys measure, but weren’t just showing points on the board for that domination in terms of possession, field position & control.
We were completing our sets and making great ground, whilst controlling the cowboys pretty well, with them often kicking from around halfway, often a terrible kick coming down only 10m ahead of the kick.
The disruption caused by Burns having to come on early and play out of position, and later Edwards coming of, could have, in other games, led to a defeat.
The cowboys put in a pretty good effort, and a couple of times really lifted their intensity, but we were able to overcome.
Not a bad player again, but Fish & NC have just taken their games to another level. In that last 20’ it’s as if Nathan said we are not going to lose this game. He is quickly becoming the most consistent, most well rounded half in the game in attack & defence, and game control.
Leaders at the halfway point in the season we ALL would have taken without question back in Feb & we should ALL be enjoying the moment. If we ever get back to normal life, we all need to learn the Billy-Nathan handshake