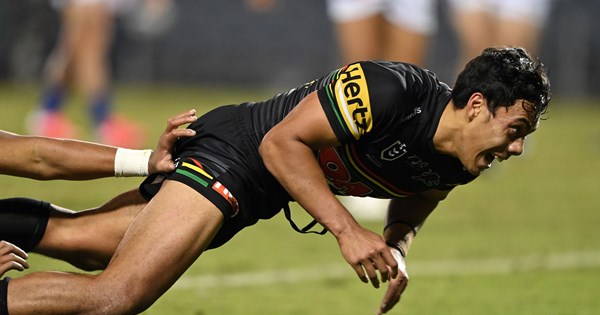 The Panthers have temporarily moved to the top of the NRL ladder and maintained their undefeated start to the season with a dominant 26-0 shutout win over the Warriors. 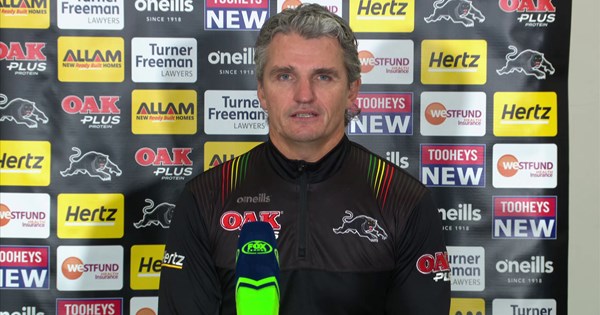 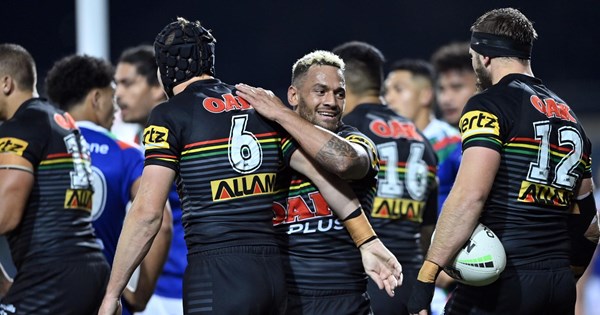 Brent Naden available but not starting - What The !

I agree with mrwalker, get rid of the statue in the 3, watching the replays of the Knights tries, he was awful in his decision making.

… if the 3 can no longer defend, there’s nothing left.

yep you’re right. There was a time I’d outrun and out drink you.
Now I’d buy you a drink if I could catch you.
Young man makes a powerful case don’t it ?

That makes me feel old.

With the players we’ve got on the roster our best team IMO requires three changes Dylan E at FB, the Dancing queen to line up with Burto in the halves and Naden in for Whare. Thats about as good as team as we have…but is it good enough.? Only time will tell.

I agree champ, only other thing is the tactics of our play, if we continue to expect our wingers and fullback to do all the hard yards early, we will get towelled up each week. Happy with kick returns, but not with a set defensive line…what a waste !

Use the big men the way they are supposed to be used, intimidate with an aggressive running style and a want for a speedy play the ball. With the new rule, it will only benefit us particularly with Api at dummy half.

I thought that IC was just being nice to DW letting him reach 150 games, and then would select another player who would have some impact. You know, just like the rabbits did with Merritt who was a ‘fan favourite’ who broke the club try scoring record and then was pensioned off.

But no, he’s named for 151. Maybe IC is playing ducks and drakes, and will make a change & play both Crichton & Naden??

Anyone else surprised Kenny will get a run again tonight - looked mighty unfit last week.

I do hope Martin plays - can add some missing X factor when he is on his game.

Stupid me! Martin was dropped out of the squad yesterday.

Such a shame both Martin and Edwards got injured once training resumed. Bound to happen with the covid lockdown, same as having an unfit player or two.

Going good so far, hope we have learnt from last week

better but they didn’t offer much at all

Agree SBF…but you can only beat whats in front of you and the boys did that tonight. It will be interesting who partners NC in the halves next week. Id give Burton the nod difficult one though.

Solid performance all round. We took some of the oomph/spirit out of the warriors with our punishing defence and powerful running. We minimized errors & made good ground pretty well every set, and capitalized on their errors.
The warriors likely will finish 9th-12th, so a team we would look to win well against.

Fish is in the top echelon of middle forwards in the game & would be portrayed by the media as a Superstar if he played for one of the ‘glamour’ clubs. As Ivan said after the game he was far & away our best player last year, and last night he went to an even higher level.

We look very strong in the forwards with Api, Fish & Kikau as good as most of the best in the NRL, and the others more than hold their own. Capewell & Tetevano look to be standout additions.

From the team last night, to be in the running at the business end, compared to the top teams, we are one centre short, and we don’t have a superstar fullback like some do, but you can’t have everything.

NC back next week against the slimies, where we will come up against some familiar faces

Pity we can’t go to the game & support the boys.

Well, temporarily at least we are top of the table after 4 rounds, and will finish the round in 2nd or 3rd spot. Our best start to the season since 97.

Our forwards are the best in the comp, most here knew that was possible pre-season, now others are seeing it. The performances of JFH and Tamou were unbelievable, ably backed up by Yeo, Tetevano and not least Leota, whose fitness and form is among the best of his career.

Burton (aka Stephen Larkim) played an almost perfect 6 role, and playing a left side combination with Cleary on the right should be the way forward.

Luai showed form in the first half, reminded me why I compared him to Thurston when he first entered first grade. Unfortunately he undid some of that good work in the second half.

How good is it to have a quality ball playing centre in Crichton? Not since Lewis or Girdler have we had that in the team. Handy kicking game too.

Despite a solid tackle, for mine Whare’s time is up. His stats are poor, he doesn’t pass enough or make the meteres of others (only players with worse run metres where Kenny and Burns who played limited minutes). Worst effective tackle % in the team too, despite that one rib buster. Naden in for Whare.

Next week should see Cleary and Edwards back. I would leave Burton I. The 6, and get Luai practicing dummy half passing as respite for Api (who was visibly fatigued prior to being benched - an otherwise great performance).

We should also consider rotating forward bench spots with a short season and no reserve grade. Hethrington and Martin should be in the mix.

Overall very impressed and confident with the season so far. A few interesting selection choices given our depth.

As the season goes on, and with the renewed pace from the rule and ref changes, I believe the role of Lock may be better suited to an older style mobile ball playing lock, rather than an other prop running up the middle. Imagine May filling this role, possibly coming on at say the 25 minute mark after Yeo has softened them up.

I hold good confidence against the slimeys, as long as we keep our attention up we should do well.

Last week was first game back after 8 weeks off, with no trial games, and limited contact training. This week was a much better indication of were we stand.

Finally, the ghost of Hook may have finally departed the building, the halves seemed to enjoy freedom to play what was in front of them.

agree with you both Mr W and SHF
But like i said the Warriors didn’t offer much at all and to be honest are really short on firepower and glad Egan is playing for them
For us agree there are quite a few talents exposing themselves in Burton who should get the 6 spot over Luai and a spot has to be found for Crichton
JFH has found his mojo and his intensity yet simple game is now beginning to work for him
We need API and he just looks a little off his best but his value to us is immeasurable as he really holds the centre in defence and when he runs, he causes havoc in the other mob

Now to Whare, he is a glaring soft point for us with his defence going to pieces in rushing up and exposing To’o to numbers and against a better team than the Warriors, we would get slaughtered
He is not even making bone jarring hits, its almost like he has lost confidence in his game and his inside player in making the tackle.
Overall, winning albeit not being at your best is good and gives you wiggle room at the back end of the year and with the rule changes plus our mobility holds us in good stead for the season IMO

Cleary coming back simply adds more firepower and more stiffness in defence, i hope he learns to organise and has developed options in the opposition red zone Note to self…loved Burtons pass to Burns who was charging back at an angle to score a very good try
Was nice to see a changeup in attack and look to see more of this.

Agree with Burtons pass to Burns - looked very Jimmyesq. Shows he is learning well and knows when to apply it.

Have to say I disagree with loving Crichton to fullback at the moment. We don’t need it as Aekins while slightly boring is as safe as a bank, and Edwards offers more. With Crichton in the centres we have the backbone attack covered. Don’t know yet if Crichton can handled first grade defense at fullback.

Had a thought that if Naden is having issues with fitness, replace Whare with Capewell. Very experienced at centre, with great defense, as well as running and passing game. Would also allow Martin into the second row, if fit.

The thought of the above gets me somewhat salivating. First time in a long time for this club, especially this early in the season.