8 unanswered converted trys. It doesn’t get much better.
Cronulla were outclassed on this occasion as it could’ve been more.
To’o 200+ running metres, Cleary 8 from 8, API back in the groove,
Capewell a real goer, our forwards relentless, Edwards as safe as a bank. The Forbes Ferrari on song but for a couple of dropped balls. A complete performance tactically and coach has started
his rotation. This squad is exceptional and can improve.

I hope the NRL doesn’t use us a a scapegoat again for the crusher tackle. I am thinking Api carries carry over points.

Very comprehensive once again. As the wins mount up, I can’t help but feel a little nervous as each game, where we are expected to win, rolls around.
Guess the guys don’t get nervous

The way they play, the way they defend is a sight to behold. Everyone knows there role & performs to a high level week in week out. And they have fun. The way the squad has developed all the skills is amazing - options everywhere.

As I commented in the voting thread, so many good performances are making it so hard to award points, and I guess our guys are cancelling each other out somewhat in the Dally M’s. Especially when Blockhead Roach gave DCE a point in last weeks game - he was pretty well the worst player on the park.

From the first set we were on song & never gave the gummies a look in. Great to be a Panther!!!

so many have covered all aspects labout ast night and its a great feeling to win and to keep winning and last night there were a few highlights for me.
Firstly JFH would have to be the worlds best Forward atm by a long way and what he doing in attack and defence simply cannot be understated but he isn’t alone, the entire forward pack are hunting and hurting as a group.
Sorenson impressed me greatly last night and if he can maintain his effort and increase his game time he will be an important addition to our squad, i loved his energy and his overall game.

Our right side attack last night was a thing of beauty, sure we had a couple of hiccups but in the main our execution , intent, energy, effort was great to watch

Crichton had his best game for a while and while Kikau may need to be rested during a game but when he his on the field his “off the ball” efforts are quite sensational to watch and last night he was causing havoc in not so much what he does but what he may do…defences cannot read us.

The boys look look like they are loving what they do…together and that is coming through in what they do.

Cronulla were shocking but that in no way takes away our effort, they could only play as well as we allowed them.

This is a team building into the year, makes us salivate about what is to come from this group.

Enjoy boys, you deserve the accolades you are receiving.

Only watched the extended highlights on the NRL website but Cronulla only touched the ball twice from memory - say no more.

And I have nothing more to say - yet.

12 changes has been made to the Jersey Flegg team, including 10 call-ups from players in the SG Ball side, due to “the impact of the upgraded NRL COVID-19 protocols”

I’m still trying to find out what that exactly means.

UPDATE The Panthers have drawn 20 - 20 with the third placed Sharks at Fulltime. 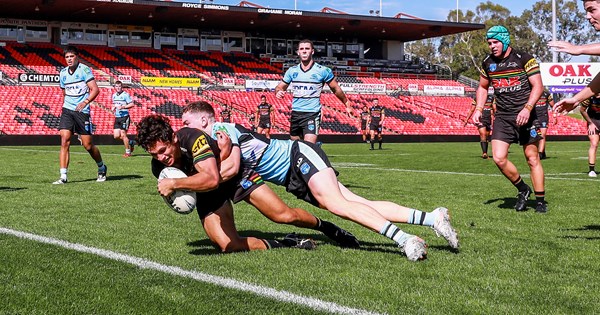 The undermanned Jersey Flegg Panthers score a late try to secure a 20-all draw against Cronulla Sharks at BlueBet Stadium.

Just got through the late mail for NSW Cup.

17 changes made to this squad, 9 St Marys Ron Massey Cup representatives and 8 Panthers Jersey Flegg players were added to the side after 12 players and coach Peter Wallace have been excluded due to “NRL COVID Bubble Level 3 protocols”

The side will be coached by St Marys Saints coach Brad Drew.

This has been an extraordinary effort to ensure a game could be played today.

UPDATE Newtown Jets lead 14-12 at half time. Panthers started a bit rough but it stated coming together towards halftime. 2 late tries to Thomas Jenkins and Adam Fearnley reigned in the 14-0 lead by the Jets.

UPDATE 70th Minute. Panthers lead 40-18. The Panthers are looking sharp and now really starting to stick it to the Jets. Amazing performance.

UPDATE FULL TIME. The “makeshift” Panthers put together an awesome team effort to put the Newtons Jets away, winning 46-18 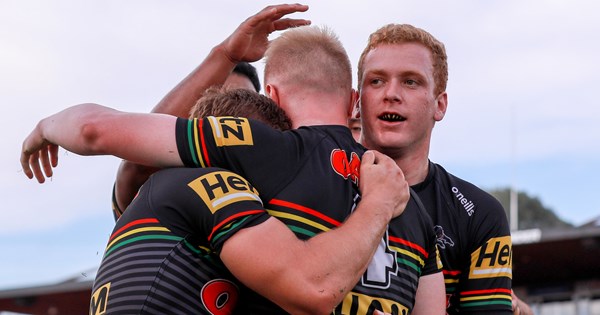 A makeshift Panthers NSW Cup side keep their unbeaten run alive with a remarkable 46-18 upset victory over Newtown Jets at BlueBet Stadium.

Sorry about the bombardment of updates, I was fortunate to have my laptop on me today at Bluebet Stadium for this afternoon lower grade matches.

So last night… what a performance. It almost seemed like they were in second gear, but if that’s second gear, they will be a force hard to stop at full tilt.

I couldn’t find a fault in that match last night, kicks were coming from everywhere, I think in total there would have been 5, maybe 6 kickers. The Sharks had no answers, the Panthers kept them playing out of their own 20m the whole night, did not give them an inch.

The forwards were great, Leota and JFH hitting hard early on and bending the Sharks defensive line and Yeo and Capewell finding the gaps and making massive post contact metres. Scott Sorensen (#599) has at great debut. a real solid hitter, and had a impressive 142 metres, with 62 PCM for his 40 minutes of game time.

I wasn’t sure about the Kikau try at the ground, but watching the replay this morning I agree that it was a try.

Api on report for a crusher blew my mind, as Tolman clearly turned to put himself in that position after he had made contact. Absolutely ridiculous, wasn’t penalty worthy yet alone report worthy (seem the MRC agrees, as he has not been charged).

Cleary and Luai just seem to be getting better week after week. The kicks were silky smooth only a couple not finding their mark. Add May and Burton putting a few kicks in, and a special by Capewell had the Sharks backtracking all night not knowing where they were going to strike.

The Sharks must be secretly wetting themselves and rocking in the corner when they hear the name “Charlie Staines”. Crichton drew in the defence and just let the kid run the ball, smoking them out wide and going in… not once, not twice… but thrice. As sad as it was losing Mansour this year, you can understand why, you just can’t deny him that spot, as real superstar.

It was truly an awesome team performance. Every player out there is playing for one another and they just gel as unit.

. What a performance. He’s the whole package. He was everywhere. He was hitting up hard and got the defence on the back foot on several occasions, we up on the kick chase batting back for a try assist, through on another kick chase and was almost over himself, dropping at the last moment (guess he is human after all)… and then a sneaky kick through for Kikau. Find out what he wants and give it to him and re-sign him.

…anyway a solid performance, and hopefully it get the try scoring juices flow for next weeks Magic Round matchup with the Titans.

Steve. Are you seriously apologising for keeping us up to date? It is great to be able to receive these updates.

Then tell your friends if they want to be up to date, stick with Steve @ pantherpride

And Charlie needs a soccer coach!

Awesome result, with us showing our potency across the park. I always love beating the Sharps.

No need to apologize (l

) mate, like i said, I am happy to be proven wrong. I haven’t seen the game yet, was away for the weekend (no service) so looking forward to watching the replay tonight. I will provide my Capewell critique accordingly

I haven’t read a lot about the slug, in a couple of posts there were mentions for 13 or 14 players…

What was Liam Martin’s charge / fine for?

where do you go there’s ‘no service’ of NRL?

Only asking so fellow forum faithful don’t mistakenly stop off.

Tuena - There is service in town, but we stay a few k’s out of town. Sit around a fire, drinking cans solving the mysteries of the world

You will be pleased to know Steve, Capewell got a vote from me based on the replay i watched, shortened version.