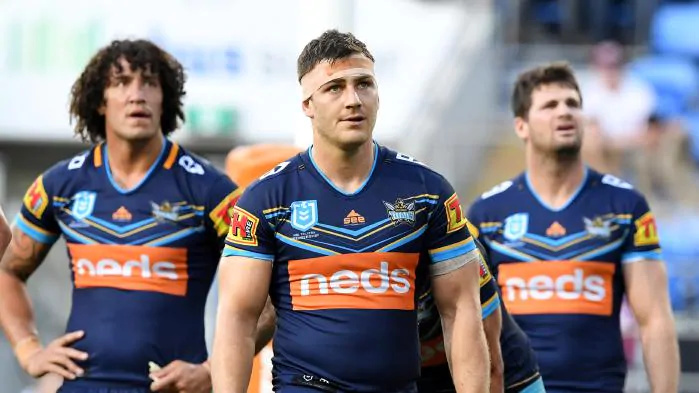 image699×393 112 KB
NSW State of Origin coach Brad Fittler has suggested it’s time for the NRL to abandon the Gold Coast and move the Titans to Brisbane.
Coach Garth Brennan was sacked on Sunday, a day before rugby league legend Mal Meninga presents his findings of a mid-season review to the Titans’ board on Monday.

Meninga was appointed in May to undertake the evaluation as part of his role as the club’s head of performance and culture.

Despite being less than two years into the role, Brennan is an early victim of the review, which is expected to bring about wide-ranging changes to the Titans’ operations.

Fittler, however, suggested removing Brennan is akin to putting a Band-Aid over a mortal wound and it may be time to consider the viability of an NRL team on the Gold Coast.

The NRL has outlined intentions to expand the competition by 2023 with a second Brisbane team a major part of the league’s plan.

Fittler has argued the solution could simply be to shift the Titans north.

“Why wouldn’t the Gold Coast be the second Brisbane team?,” he told the Nine Network.

“There’s 4000 people turn up to watch them each week. Let’s not call it a success.

“They had a couple of good years at the start, without a doubt, and they played semi-finals but it’s far from a success.” Since entering the competition in 2007, the Titans have made the top eight just three times.

The Gold Coast has long been a sporting graveyard in Australia with several national franchises struggling to survive in the nation’s sixth-biggest city. A former national rugby league team which played under three nicknames — the Giants, Seagulls and Chargers — for a decade from 1988 was shut down in 1998 as part of the fallout from the Super League war.

Basketball, soccer and rugby union teams have been and gone while the AFL’s Suns are also struggling for relevance having failed to reach the finals since joining that competition in 2011. 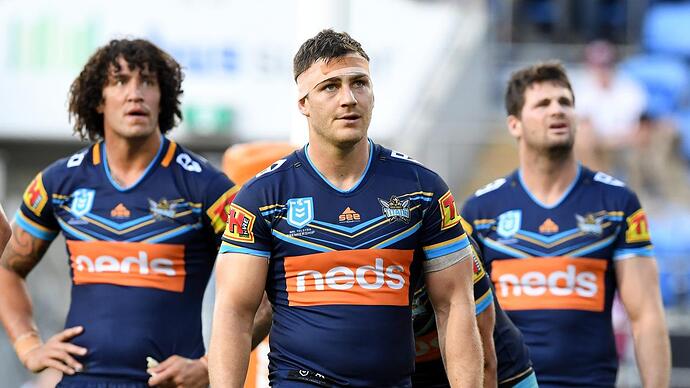 As much as it pains me to suggest a team relocate or merge, Fittler might be on the money here.

Questions have to be asked about whether the Gold Coast is a good place to place a team of any code.

On top of this you can add Gold Coast Cougars/Roller/Blaze in the NBL (Folded), Gold Coast United FC (Folded). As well as the struggling Gold Coast Suns team in the AFL.

Home crowds have dwindled since inception of the Titans, starting string in season one with 21,000+ on average, they now only command only half that now, and the numbers would suggest (as well as current form) that the crowd could slump under 10,000 in 2020.

This is not an inherent problem with Rugby League though, it’s also is happening in the AFL as well. Take a look at the table below and you can see the decline is almost identical.

This is even before we even get into the financial problems of the Titans. Posting losses every year, with poor crowds and struggling to get major sponsors into the stadium due to the clubs poor performance, it will be hard to see them trade out of this problem.

The club is in voluntary administration the licence is currently held by the NRL. With a asking price of $15m, not many takers have expressed interest in the club. it was sold to a consortium in 2017 for $25m but I would suspect they would ever reclaim that investment in the foreseeable future.

So, what does the NRL do? There are plenty of viable areas for NRL franchise, Redcliffe, Ipswich, Sunshine Coast. Perth is screaming for a NRL Licence. So if the Titans can’t generate interest in the game on the Gold Coast, is it time to admit failure on the Gold Coast region (yet again) and move the club (or the licence)?

What are your thoughts?
Why is the Gold Coast a cemetary of sporting clubs, and how can it be fixed?
Should the club or licence moved to another city?

… problem is not the Gold Coast, it’s the Broncos.
Big brother up the road have had their way for far too long.
Walls Lewis couldn’t draw a crowd to the Coast. A second
team in Brisbane is now too little, too late. The NRL have
stuffed up again. Mal Meninga’s review won’t fix a thing.

Too many teams in Sydney, not enough in Brisbane, and
they want to go to Perth. Further west, try Madagasca !!!

Perth makes sense, especially for the next TV rights deal.

Being 2 hours behind the east coast team opens up some options.

Playing there allows 3 Friday/Saturday/Sunday night games live. a 7:30pm kick-off in perth will be a 9:30pm kickoff in the Eastern States.

I also think there is an appetite for Lague in Western Australia. The State of Origin sold out and there has been a vacuum left by the Western Forces removal from Super Rugby.

Despite the South Queensland Crushers being folded by the NRL in 1998 the club was relatively healthy financially and drew decent crowds. There are definitely room for 2 teams in SE Queensland, I’m just not sure the Titans is the answer.

Just a side note, I was a fans of the Titans coming into the NRL. I though great things would come from them, but now I am willing to say I was wrong, I don’t see a future there.

That being said the Gold Coast have always had a problem in any incarnation because they don’t have a successful team, its always been a place for fringe players to go to or stay at.

get a successful franchise and the rest looks after itself.

It perhaps simplistic but i agree Sydney has way too many teams and we say 16 teams is the optimal number lets move franchises from Sydney…why not another team in Melbourne, 1 in Perth …this way you can reduce the teams in Sydney by at least 2

NRL needs a shake up and fast as it needs to reflect the changing demographics and the size of its teams…maybe 12 would be the optimal number in the NRL and this way the calibre of players is more evenly spread.

Shuttering the Titans is not the answer…finding out how to fix the issues there is the question!

The GC are nothing more than a feeder club and a retirement village, no one in their prime wants to be there unless they have a lack of desire to be the best they can be.

They all (plus the others) moved there for the money when they were going ok. You can’t buy a team you need to build it.

That being said the Gold Coast have always had a problem in any incarnation because they don’t have a successful team, its always been a place for fringe players to go to or stay at.

get a successful franchise and the rest looks after itself.

Shuttering the Titans is not the answer…finding out how to fix the issues there is the question!

A fair point. But how do you fix that problem, is it an issue where the NRL needs to step in and do some analysis of the region?

You could drop in some of the world best administrators and I don’t think they could straighten it out. A case study into failure of clubs in the Gold Coast might add some value.

Relocation is the easy answer but not necessarily the best answer. Well put together bids are trying to break down the door for a licence, It would be easy to take it away from the Titans and had it on.

On the number of teams, I think the magic number is 20, and perhaps splitting the competition into conferences, but I’m sure the NRL are working on what that number will be, I suspect it will be 18 to 20.

There are a number of questions which come from your post Steve
And i think we need to make a clear distinction between the Football Club and a Leagues Club and the relevant administrators.
One could argue both at any franchise are riddled with inept administrators…but it’s clear Melb/Brisb/Cowboys and Raiders are franchises who succeed not only on the field but succeed financially.

On the numbers i personally don’t see enough quality players to have 20 teams and that in itself raises the questions about how does the NRL ensure the “correct” model is in place to ensure longevity and viability for the franchises.

To be honest i would rather see a reduction in the short term but this would only happen once a model framework was in place and then build off this by inviting potential franchises to submit propositions to join the NRL.

The NRL has made some major investment in pathways in the past few years. They have made investment into Mod League (OzTag) and brought Touch Football under the NRL banner. In the next 5 years there should be a wealth of talent waiting to take a place on the big stage.

Rugby League is looking a lot healthier than other codes at the moment.

“should be a wealth of talent” etc

will we ever see a 5yr plan culminate in a positive outcome?

Fair dinkum criticising the GC on the basis of crowds is a bit rich. Compared to quite a few Sydney clubs, including our own, those crowds range from reasonable to healthy …more importantly, those early years show a high potential given the right management, on-field performance and marketing of the team.

Not making a case for them but jeez - the last 5 seasons (2014-2018) Penrith has bettered their home game crowd only twice and this year it looks like being marginal.

AND Penrith has played footy DEEP into the year on 4 of those years.

Perhaps, in terms of off-field performance, a critical examination of our own backyard is needed before bagging others.