Finally a real heavyweight title fight. No retired footballers.
They were evenly matched to start with and produced an epic.
They both went down but in the end Fury was too strong.
Good stuff !!!

I used to love watching the boxing Puss, but you are 100% right, it’s turned into a bit of a circus. Glad you stuck with it, the fact it was the 3rd meeting suggested to me it was another farcical money maker.

Saw the highlights and was spuing i missed it.

they were throwing bombs and both spent time on the canvas.
Watch the highlight reel and try and spot a jab ! They both need to take a rest now surely.

Rugby (League and Union) have gone to tremendous lengths over recent years to protect players’ heads from injury and the debilitating long term effects. Boxing has the exact opposite intent - the KO or TKO. Does ‘punch drunk’ ring a bell? Footy makes hit players take a week or more off; boxing gives them about 10 seconds. For me, boxing is a barbaric relic of the past, best killed off.

Fair enough, each to their own Faulco !

I agree it’s a ridiculous scenario that 2 people try to bash each other senseless, but i also have that primal instinct to want to see who the ‘toughest’ of the 2, who AGREE to do it is.

If you listen to boxing efficienado, they say that boxers are trained to handle these head punches, doesn’t make sense to me but i’ve rarely been punched in the head !

I’m not exactly sure what they mean by “handle head punches”, like it is something you can manage, trauma to the head isn’t something you exactly manage.

I have copped a few shots to the head playing footy in my younger days… in more than one way, and it affects you for more than a few seconds. In certain instances I felt off for quite a few days.

My wife rides horses in her spare time, and she has come off it on a few occasions. The last time she fell head first into the ground (wearing a helmet), the ambulance took her to the hospital, and all it took was for the ambulance drive to mention to triage that it was a head injury and she shot straight to the top of the queue at Emergency.

That turned out to be a concussion in the end thankfully. I can’t imagine how a person can stand there taking repeated blows to the head (padded gloves or not) and think they are “handling” it. the force of those punches alone is knocking your brain about like shaking a pickle jar. You are certain to suffer from CTE in your future.

If you are unfamiliar with CTE, I suggest watching the 2015 film Concussion staring Will Smith. forensic pathologist who fights against the National Football League trying to suppress his research on CTE.

I am kind of the same camp as @FaulcoPete, knowing all we know now, I find the sport to be unwatchable.

… you know once upon a time Gladiators fought in Coloseums with shields and swords so boxing was almost a genteel art.

My father used to take me to the local Police Boys Club where we used to spar, albeit with padded head gear. Was I any good, nar, but I had fun tryin. I’d be a fat lightweight now. I was never going to be a Rugby League footballer, too small, not strong enough. Then my mother decided I should try soccer, it’s safer she reasoned. But nowadays heading a ball in the juniors is frowned upon. You might get brain damage. So, no boxing, no Rugby League, no soccer. I started riding motorcycles but it was too bloody dangerous even with head gear as a cousin found out. She was crippled when a quaddy backflipped on sand hills and crushed her.

Seems to me there’s risk aplenty out there for those willing to take that chance and I don’t reckon the men folk are goin to accept feather dusters at 1.5m (COVID precaution) as an enjoyable alternate to any of the above. Will the NRL end up a’la NFL and wear helmets ??? if so let ‘em know I got a few used spares in the shed.

Meanwhile, each to their own, if you don’t like boxing don’t watch it.
But should you or your kids choose to participate in competitive sport be aware of the risk, be safe, be happy.

Same with cricket nowaday’s Puss, since the Hughesy incident, the aggressive short ball is frowned upon.

Are you still allowed to drink schooners while your playing lawn bowls, or has that been banned because you might fall over and hurt yourself…

What are everyone’s thoughts on cage fighting? Now that is barbaric, you can punch, kick, elbow, strangle…basically everything except a direct head butt, the only protection is a mouth guard and tackle protector, heaven forbid you should cop one in the nuts

I used to watch boxing quite a bit in the 90’s, and play a lot of contact sport as a kid. I’m not suggesting they ban the sport, like @Puss said, if you don’t like it, don’t watch it.

But I do feel for those who have played the sport and might not have been fully aware of CTE or the risk of brain damage, who’s lives with terrible affects, and some cases result in some terrible events (eg: Professional Wrestler Chris Beniot).

But if people are informed of the risks then I say sport is about recreation essentially. Enjoy a beers with lawn bowls… have at it. As long as the choice is informed and they are aware of the risk then it is what it is.

Kind of like people who take up smoking these days… They are aware of the risks, they are plastered all over the box, if you choose to smoke, then it’s hard to swallow the “The tobacco companies are behind it” arguement.

‘ no schooners while playing bowls ‘ - you’d soon get jack of that eh !

I’d suggest it’s more to do with the “toucha” that is the potential problem Puss.

Not hi jacking anything Steve, just an open chat with alternative views, all good.

This is such a useful topic, and it’s good to have a thoughtful and considerate forum to host it. There is much valid commentary here, and much of it will always be personal preference, as Puss makes clear. I am not stranger to danger either, having trekked (sometimes alone) in places like Chilean Patagonia, the Peruvian Andes, Outer Mongolia or far north India (near the Pakistan border, and where islamic terrorists wiped out a party of climbers and most of a Buddhist monastery). But those dangers, as in footy, were incidental to the activity (except heading in soccer), and here’s the key for me. In boxing, the actual primary aim is to inflict brain damage. There’s no escaping that.

Boxing is a combat sport, rugby league a full contact sport.
In your opinion would the introduction of headgear go part way to legitimising both governing bodies efforts to reduce head (brain) trauma from mild-severe concussions ???

Puss, apparently it has been proven that head gear actually makes the head knocks worse by reducing the possible movement of the brain, don’t quote me i’m not a specialist but that is what i have heard.

Co-incidentally, I watched the Connor McGregor special on Fox Docos last night, his 2 main fights on this doco highlight Pete’s comments, Diaz won the first fight (strangle) but was beaten very badly. The 2nd fight he was beaten even worse and lost but went the distance. The enthusiasts applaud his ability to stand the entire time whilst the medical profession would have their head in their hands knowing this guy will suffer long term head issues. If you get a chance, have a look at the Diaz head in fight 2 at the end, it’s almost like you would see his actual skull if there wasn’t so much blood.

I was cringing at some of the brutality but couldn’t look away - what does that say about me???

@Kevin the NFL have been testing helmets and encouraging better designs with brain movement and CTE in mind.

That being said though no helmet has come back with the result of no damage occurring, rather levels of effectiveness. 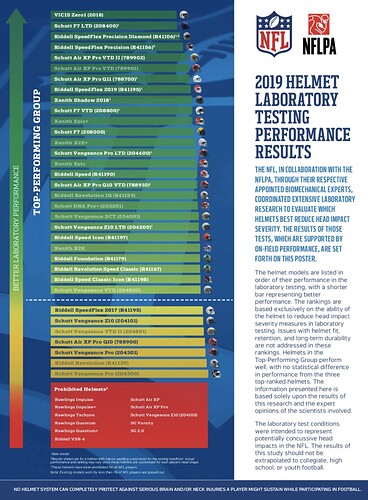 Yer my reference was to head gear that is used in RL. I recall Beaver saying he was told of limited benefit if any and his response was, it made him feel comfortable, plus what a marketing strategy for him hey, he’d still be getting paid for it !!

JT also, had to have his head gear on to kick goals, even if it wasn’t done up.