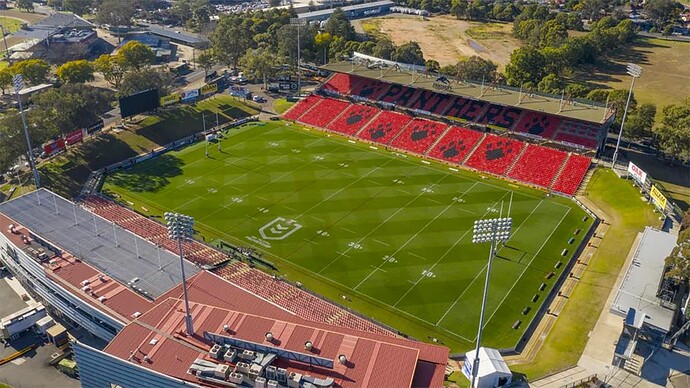 The pieces of the NSW stadium funding puzzle are starting to fall into place, with Penrith on the cusp of securing a new stadium, while Stadium Australia could get a new retractable roof.

Talk of where stadium funding would be directed has been ongoing since the NSW government abandoned the $810 million redevelopment of Stadium Australia in 2020. While the NRL has pushed for the funds to be redirected to the development of boutique stadiums, an upgrade of sorts is back on the table for Sydney’s Olympic stadium.

9 News has reported a decision on the list of stadiums to be upgraded is almost finished and will be announced prior to Christmas, as NSW Premier Dominic Perrottet looks to spend $800 million on stadium infrastructure over the next five years.

It’s understood Penrith would benefit first, with $300 million to be spent on a brand new 25,000-seat stadium to replace the existing BlueBet Stadium, with construction to begin at the end of the 2022 season. The Panthers would play at CommBank Stadium for two years, before returning to their new home for the 2025 season.

Also expected to receive upgrades is Brookvale Oval and Jubilee Stadium, however the traditional home of the Wests Tigers, Leichhardt Oval, is expected to miss out. It also remains to be seen if a proposed new stadium will be built in Liverpool.

Meanwhile, after Stadium Australia’s major redevelopment was scrapped, the Sydney Olympic Park venue could yet receive an upgrade, with a $120 million retractable roof proposed for the venue.

The roof is part of a significant overhaul for Sydney’s biggest stadium, to safeguard the venue and state as a major-event destination, to ensure events can proceed in front of more than 80,000 fans regardless of the weather.

The stadium has fallen out of favour with fans in recent years and while a new monster video screen is currently being installed, more is needed to bring it back to world-class status.

The stadium’s corporate areas and bar and dining facilities would also be refurbished as part of the upgrade, however the grandstands are expected to remain as is, leaving the stadium halfway between a rectangular and oval venue.

An upgraded Stadium Australia would mean the South Sydney Rabbitohs would likely remain playing home games at the venue, while the NRL would also guarantee the Grand Final remains in Sydney for a further 25 years. 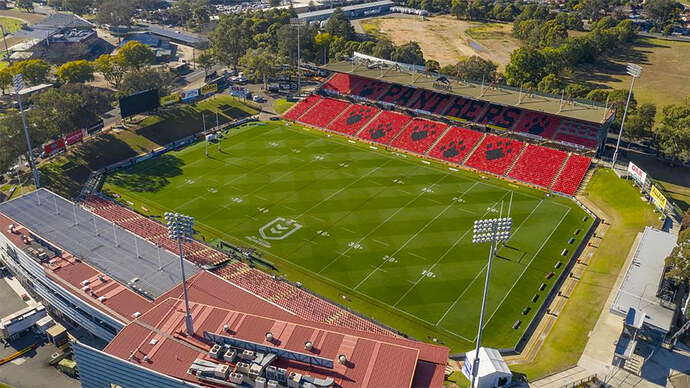 The pieces of the NSW stadium funding puzzle are starting to fall into place, with Penrith on the cusp of securing a new stadium, while Stadium Australia could get a new retractable roof.

Why would you, with all the talk of the population growing out west not to mention the massive infrastructure undertaking we expect to have, only make it 25k seat stadium, I expect there will be no standing, so the maximum attendance is 25k?

You would think they you allow some growth, even 30k !

I don’t get it…unless the architect is an idiot !

I would rather Panthers work with some regional partners in 2023 and 2024 and play half of the home games at regional venues, than playing 12 games at Commbank Stadium.

I do understand that the revenue impact would be an issue, but I’m sure some sort of arrangement can be sought from the NRL to help subsidise the game day revenue penalty incurred by playing at venues with reduced stadium capacity, especially since the NRL has been big on bringing the game to the bush.

I’m sure places like Bathurst would enjoy having 2 or 3 games at Carrington Park for 2 years.

You would think they you allow some growth, even 30k !

I think the problem may have to do with the parcel of land they will have to work with. I imagine the East-West side will be expanded to take up the small field on the outside and extend the stadium area to Mulgoa Road.

But there is not much room in regards to the North-South Space. To make it fit you would have to run the stadium end to end on the East-West side. Using Commbank Stadium as a reference for a 30,000 seat stadium it would struggle to fit in that space.

My suggestion would be this. In 2018 Penrith raceway has mentioned that they were considering selling the site and moving.

They should make a bid to purchase the land and put a 30,000 seat stadium there. Tear down the old Penrith Stadium and put in a dual car park space (I’m sure Penrith would love the additional spots). and then put in some park space or space for people to gather before and after the game, maybe some food vendors.

You would get your 30,000 seat stadium, add some much needed parking and make a social space more central to that area (and the league club).

I’m no architect, but this makes sense to me.

LOVE IT - Make it happen will ya

I would rather Panthers work with some regional partners in 2023 and 2024 and play half of the home games at regional venues, than playing 12 games at Commbank Stadium.

Steve, I think the Paceway land is worth a shipload & is earmarked for residential & commercial development that would make some people a lot of money, more than could be justified for a sports stadium.

Maybe so, but i am thinking from more of a planning perspective. The council have been looking for something to help develop the area, shift the CBD out a little more that High/Henry Street and solve a terrible parking shortage.

There is also a parcel of land across the the stadium on Station Street screaming to be developed and may be more suited as it is away from the busy Mulgoa Road.

It’s a moot point as the state government in their infinitely short framed minds will go ahead and build the bare minimum to sure up votes and help out their developer mates, so I wouldn’t be too concerned.

25k - 30k capacity announced by the premier (although channel 9 said “up to 25k” which was incorrect).

Local member Stuart Ayres also responded when asked on 2GB that he was open to the idea of a studium roof. The NSW Government has confirmed the 2022 NRL season will be the Penrith Panthers' final season at BlueBet Stadium before it makes way for a new, world class stadium facility. 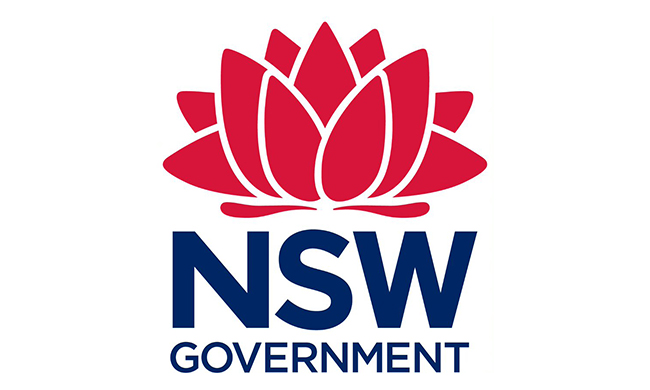 Penrith set to roar as Panthers stadium to get massive upgrade

The NSW Government will redevelop Penrith Stadium as part of its commitment to turn suburban venues into world class facilities. 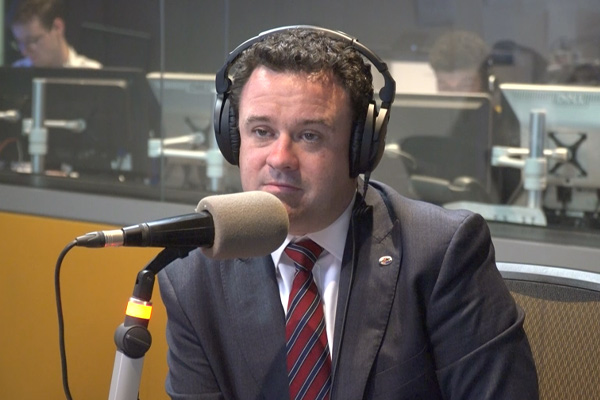 Minister for Western Sydney Stuart Ayres has rejected suggestions a new NRL stadium for Penrith amounts to pork-barrelling in his safe Liberal electorate. Penrith’s BlueBet Stadium is to be knocked over in 2023 and rebuilt, with prospective designs... 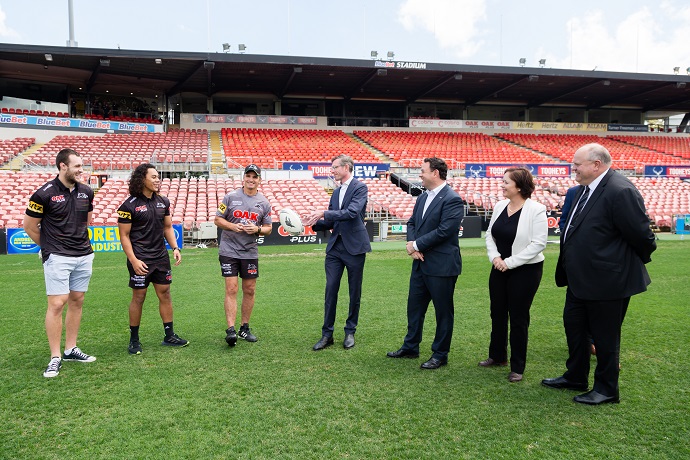 It's been a long time coming but it's finally officially - Penrith, the home of the Panthers, is getting a new stadium.

Minister for Western Sydney Stuart Ayres has rejected suggestions a new NRL stadium for Penrith amounts to pork-barrelling in his safe Liberal electorate.

Firstly… I would hardly call his electorate ‘safe’ and secondly, judging by the cringey presser Stuart and Dom had at the stadium yesterday, it really comes off like pork-barreling to me.

What’s that I smell? Is that an election coming along, just at the right time?

It will just be hitting the construction phase as the election rolls around… perfect place to do a presser and preach on how the NSW Government cares about Penrith.

I have had some thoughts on our last home game this year.

Do a deal with blubet to rename the ground for the day back to Penrith Park.

Do a deal with Oak, Hertz etc that we go sponsor less of our jersey.