Penrith Panthers voting will be held this weekend. 5 board seats are up for election with 6 candidates nominated. Voting will commence on Friday18th February 2022 and conclude on Monday 21st February.

The ballot will be held at the Woodriff Room at the Panther Leagues Club in Penrith. 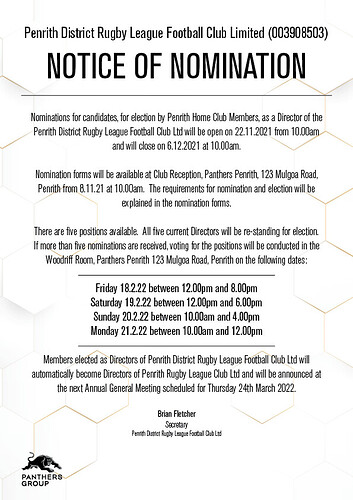 Nominations for candidates, for election by Penrith Home Club Members, as a Director of the Penrith District Rugby League Football Club Ltd opens 21.11.2019

As passionate Panthers supporter, David would like to repay Panthers with his time and energy by focusing on continuing the growth of Panthers Group. Dave is a Director of ABCOE Distributors, Penrith. He is also the Chairman of Panthers on the Prowl. David has completed the Clubs NSW Finance for Club Boards as well as the Director Foundation and Management Collaboration courses.

A passionate support of Panthers and a corporate sponsor. Ian is the Managing Director of Hix Group Pty Ltd, a local business that employs over 70 local people. He has been a Panthers member for more than 30 years and is passionate about representing the members interest, as well as helping Panthers to continue its growth to become the biggest and best club in Australia. He is a Director of Panthers on the Prowl, as well as a Director of Western Sydney Business Centre and a Director of Penrith CBD Corporation. Ian has completed the ClubsNSW Finance for Club Boards and the Director Foundation and Management Collaboration courses.

A proud Penrith local and long time, passionate supporter of Panthers. Rob is the Managing Director of Mulgoa Quarries, a local earth moving and civil contracting company and employer of approximately 150 local people since 1986. Rob is a member and former Chairman of Olatype Pty Ltd – Penrith Business Group. He has been a Director of Sydney Business Park since 2007. Rob is community focused and is a founding member of The Great Walk Foundation, a Penrith charity. He is also a Director of Thorndale Foundation, a local disability services provider. Rob is an active supporter of the Children’s Cancer Institute, as well as Royal Far West, which helps connect country children with urgent developmental and mental health support.

Born, bred and raised in Penrith and is a lifetime Panthers supporter. Mark is a Board Member of Panthers on the Prowl as well as a founding member of The Great Walk Foundation, a Penrith charity. He is Member and the current Chairman of Olatype Pty Limited – Penrith Business Group. He is also a part-time Member of the NSW Civil and Administrative Tribunal. Mark has been a legal practitioner for 35 years, practising in Penrith as Mark Mulock & Co Pty. Limited since 1991. Mark completed the ClubsNSW Finance for Club Boards and the Director Foundation and Management Collaboration courses.

Employed at Panthers for over 40 years, John considers Panthers as one of the great blessings in his life. Since recently retiring, he has decided to run for the board. He will ensure that decisions are made in the members’ best interests, that we have a strong football side and that the club is financially sound for generations to come.

* Nominee is a current board member

I know the subject of Board Elections has been taboo on here, as when the forum was administered by the club discussion regarding the election was not allowed.

Times have moved on, as have the board of that day, as has the forum now in independent hands.

I usually would not suggest a nominee but on this occasion I would like to suggest John Farragher.

Many of you would have met John upon visiting the club in the past. He would be in the foyer and be more than happy to talk with fans and members of the club. His passion for this club was clearly evident every time you would speak with him, and since his retirement it has been sadly missed by many.

I personally feel his voice would be welcomed in the board and his input would be invaluable. A stalwart of his calibre would be an excellent addition to our board.

Please do consider John if you are casting your vote this weekend.

I usually would not suggest a nominee but on this occasion I would like to suggest John Farragher.

But I am reliably informed that the rest of the board are not too happy.

To be honest, I didn’t think Johns appointment to the board would come at the expense of Dave O’Neill, but I guess that’s how the cards have fallen.

I’m surprised he got the least amount of votes in this election. I thought of all the candidates that Dave would be one of the safe bets. 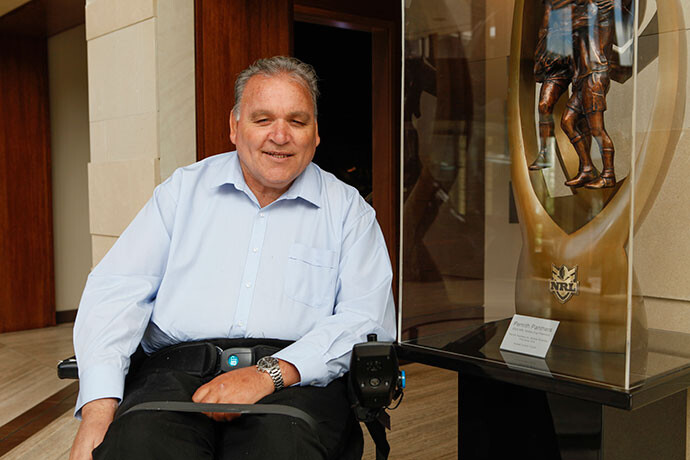 The man who brought Ivan Cleary back to the Penrith Panthers has been dramatically rolled at the club’s Board election.

Chairman Dave O’Neill has fallen short of being re-elected to the Board, just four months after Penrith won its third Premiership.

Life Member, former player and long-time employee John Farragher has been successful in winning a Board spot.

Farragher spoke to the Weekender a short time ago, saying he was “over the moon” with the result.

“It’s a very humbling experience and I wish all the other nominees well,” he said.

“I look forward to working with the other directors for the next two years and doing the best for the club, the members and staff.

“It’s a challenge for me. I’ve had a few challenges in my life prior to this though so I’m definitely up for it.”

The rolling of O’Neill could create a huge shift within the club. He is very close to the Cleary family, current CEO Brian Fletcher and the rest of the existing Board.

“Unfortunately I have missed out,” O’Neill told The Sydney Morning Herald.

“But I wish the current board and John Farragher all the best. I’m sure the business will be successful under the guidance of [CEO] Brian Fletcher. I’ve enjoyed my time on the board since January 2013.

“I want to say thankyou to Ivan Cleary and the football department who have been incredible ambassadors for our club and wish them all the best in going back-to-back [as premiers].

“I want to thank the players for giving me one of the happiest days of my life in 2021 when they won the grand final. They are great ambassadors for the club and the district.” 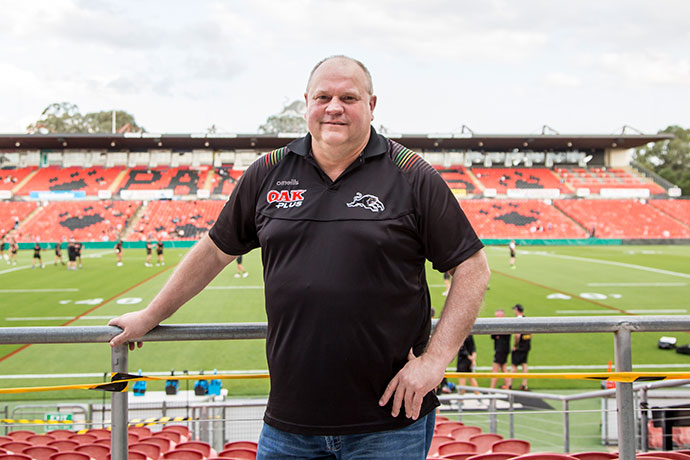 The man who brought Ivan Cleary back to the Penrith Panthers has been dramatically rolled at the club's Board election.

O’h No - I hope this board election saga doesn’t derail our footy club.

Not sure how many voted - traditionally a very small proportion of members. I didn’t vote & can’t remember the last time I did.

I’m happy for JF to get elected, but not happy that Dave O’Neill was the one to miss out as I suggest he has been nothing but good for us. Was his name on the bottom of the ballot & people just made their selections & he was the odd man out, or was there a concerted effort from somewhere to get him out?

Not sure this is good news for the club. I trust that O’Neill can continue to contribute in some capacity - maybe a casual vacancy will arise for him to come of the bench?

Panthers Group CEO Brian Fletcher, along with the club’s Board of Directors, are pleased to announce that Peter Graham has been appointed as the club’s Chairman.

A loyal supporter of the Panthers since the club’s foundation in 1967, Peter becomes the Chairman of the Board following five years of service as a Director of the club.

Entrenched in the Penrith community, Peter is a founding member of the executive of Emu Plains Little Athletics Club and has been the President of Nepean High’s P&C for six years.

He is also a Director of Panthers on the Prowl — the club’s flagship community program — and is a mentor of the Building Young Men Program.

The club is also pleased to announce that Matt Cameron has been promoted to Chief Executive Officer of the Penrith District Rugby League Football Club Limited.

Matt, who has held the position of General Manager Rugby League for the past three years, has been an integral member of the Panthers, and has been influential in the club’s back-to-back grand final appearances, including the 2021 NRL premiership.

Following six seasons as an Assistant Coach at the Parramatta Eels, Matt joined the Panthers in 2012 as the club’s High Performance Manager, and has been responsible for the alignment of the Junior Pathways and the NRL program.

He has overseen the transition of multiple junior players, who have progressed to the current NRL squad.

Penrith Panthers congratulates Peter and Matt on their new positions as the club endeavours to remain strong on and off the field. 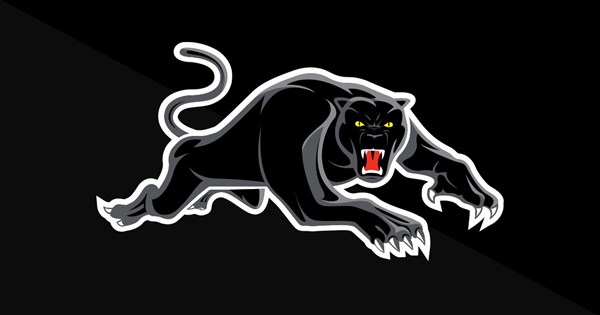 Panthers Group CEO Brian Fletcher, along with the club’s Board of Directors, are pleased to announce that Peter Graham has been appointed as the club’s Chairman and Matt Cameron as the CEO of the Penrith District Rugby League Football Club Limited.