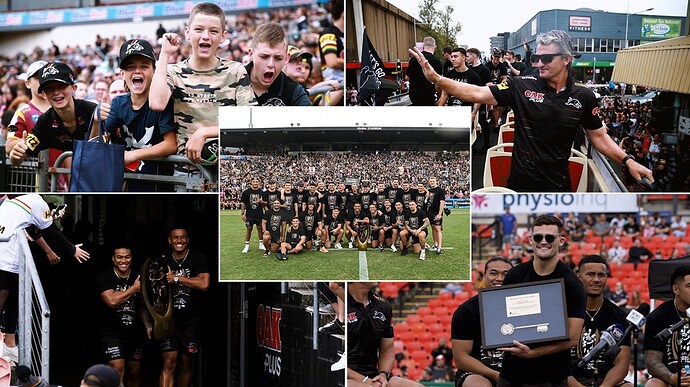 Panthers supporters have turned out in force to welcome home their premiership heroes, 48 days after they clinched the Telstra Premiership grand final in Brisbane.

Around 10,000 fans filled the seats at BlueBet Stadium on Saturday to celebrate the club’s third premiership win in a grand final parade that started on High Street in the heart of Penrith before moving to the suburban ground.

Most of the Panthers’ premiership-winning squad were in attendance to celebrate with their fanbase during the two-hour party, including departing stars Kurt Capewell, Matt Burton and Paul Momirovski.

The Panthers were presented the keys to the city by Penrith mayor Karen McKeown as part of the official ceremony, an award that has only been handed out three times prior in over 150 years.

Members of the 17 that took the field against the Rabbitohs were called out to enormous cheers from the western grandstand before local stars Stephen Crichton and Brian To’o carried out the Provan-Summons Trophy.

Panthers coach Ivan Cleary joined son Nathan, who right arm remains in a sling as he recovers from shoulder surgery, to walk onto the field together in arguably the largest cheer of the day.

The Panthers wrapped up the celebrations with a final lap of honour to soak in the community spirit.

“It was amazing, the turnout today, it still doesn’t feel real but today confirms it,” co-captain Nathan Cleary said.

“It was an absolute pleasure to do it with all these fans and the boys.”

Fan-favourite Jarome Luai also received an heroic reception as he walked onto the field before struggling to replicate his memorable handshake with best mate Brian To’o.

Luai paid tribute to the Panthers faithful on stage, many of whom paraded the streets outside his home in Mt Druitt throughout grand final week.

“It was a tough year for everyone but we love our community and are glad we got the job done,” he said.

“It’s meant a lot, especially after losing a grand final. Once the siren went off and once the boys had it there are no words to describe the feeling.” Panthers supporters have turned out in force to welcome home their premiership heroes, 48 days after they clinched the Telstra Premiership grand final in Brisbane. 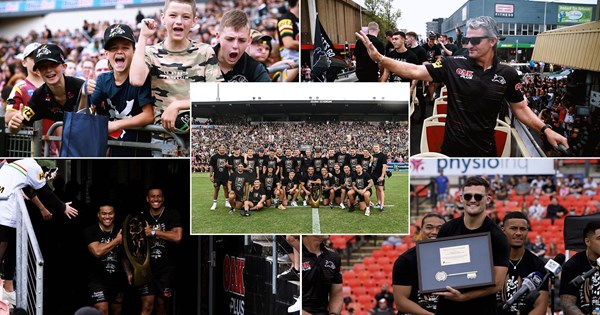 An unforgettable day in Penrith

With fans lining the streets and filling BlueBet Stadium, the 2021 Premiers return to Penrith with the Provan-Summons trophy. 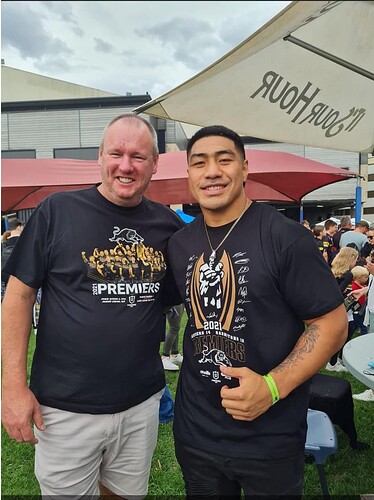 It was a great day !

ha haaaa - My daughter was getting her jersey signed, she says to Moses “My Dad loves you” to which Moses laughs, then the Mrs points to me and says it’s him and he’s getting a photo too

Put my hand on his back, he is made of granite !