Just cleaning some files on my laptop, and one day of boredom recently I ran a calculated formula to predict season finish for teams in 22.

I took into account last years standing, changes to team recruitment, Spine quality, team experience, and opposition intensity (we scored low on that as the teams will be gunning for us again this year).

With no further ado, this is the results it fed out from top to bottom (regular season)

I think the Bulldogs will finish higher, in the top half of the bottom 8.

I like what the Broncos are building… I think they will sneak into the 8.

Bit concerned with the Storm, Rabbitohs, Eel and Raiders. Lots of roster changes in key positions, it will be interesting to see how that all works out for them.

I think the Top 3 is right (in any order)

Also… you are missing the Dragons (almost missed them myself LOL)

Ok… so here is my estimate.

Haven’t had a good look at the draw, but I’m thinking roughly:

Can someone grab last years for me, it’s the same every year.

Note: I got it half right this year

Just need those filthy disgusting parasites to get the

My effort on the ladder predictor today. I think this will be close. 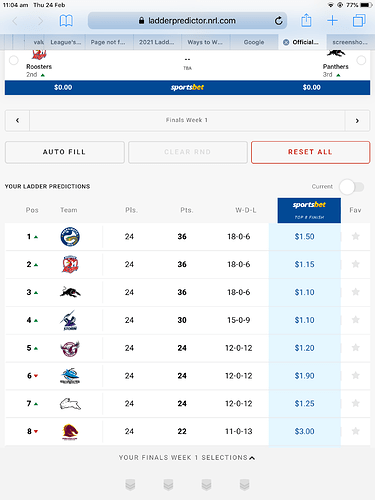 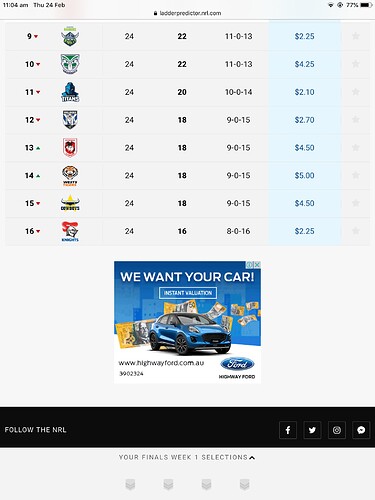 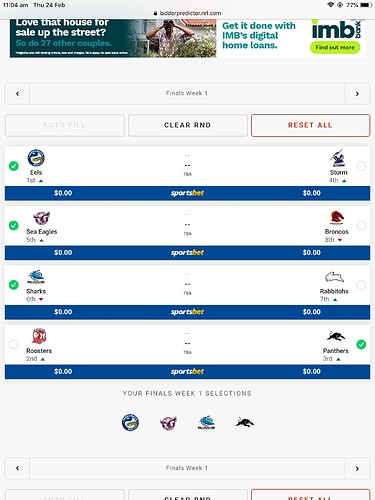 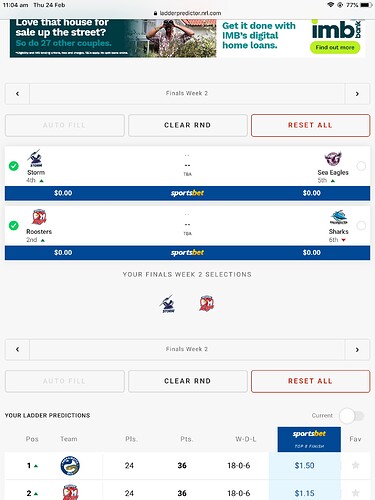 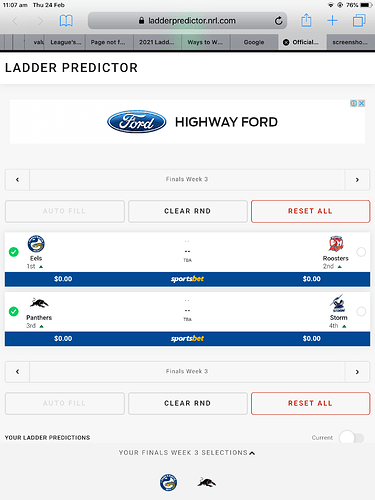 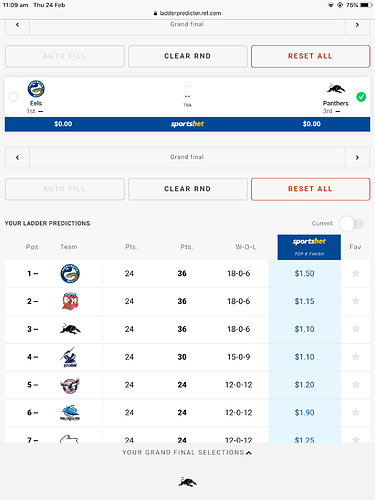 Who is 1st? Disgusting

As with every year’s predictions from me:
Minor Premiers / Premiers = Penrith
Spoon = Featherweenies

I did have a 3 way tie for first. Unfortunately I think they will come out firing, but it won’t get them all the way, unlike us

I am willing to put big money on them not making the top 4…but I hate anything to do with them !

I’m not convinced that all the talent added to the Bulldogs will improve the team overall. I’m not sold on a working halves combo. Burton is going to get burned out by being the clubs ‘miracle worker’ in the middle.

I have the Cowboys higher up the ladder then most others, and I think is they stay uninjured and their forward pack puts in every week, they could do pretty well this season, maybe clinch 8th or 7th.

I have the Titans in the 8… I think they will continue the good backend they had to 2021, The finals series will have these guys wanting more, and they know they are capable of it. I rate Justin Holbrook as a coach, I think they can go one better this year and finish 5th or 6th.

I personally think the Rabbitohs window has closed (or closing). Their best chance of winning it was last year and they didn’t come up with the goods. Bennett is gone and I’m not sure they can recreate the magic from last year.

I have NO idea what is going on at West Tigers. 5 captains this year… sounds like what McGuire was up to at the Rabbitohs… I really don’t think he is doing the Tigers any favours. I don’t see them cracking out of the bottom 4 this year.

The Dragons I can be completely wrong about… it expect some improvement, but not sue how much, might make a push for the middle 4, but I thought to play it safe and have them in the bottom 4.

Steve I agree with your commentary and these teams are all result dependent on how their halves perform…with the exception of Souths, shit forwards and Tigers who are a basket case, the others if they find some quality in the halves combos could certainly contend for an 8 spot.

My team to watch (Big improvers) for this year is the Gold Coast Titans.

They have been working for a few years to fine tune that side, and move on the ‘dead wood’. To me, it looks like all the pieces have fallen into place. I think they are in a position this year to give it a fair shake.

Remember Latrell Mitchell did not play in the grand final? Some claim if Mitchell played, the Rabbitohs would have won.

Some claim if Mitchell played, the Rabbitohs would have won.

if Mitchell played, the Rabbitohs would have won.

If this rain keeps up, it won’t come down !
If i could put Powerball on today for last nights draw, I’d be a millionaire !

You need to ignore those some that claim Boss12 lol

I actually said, well he said that with such conviction, care to share the winning lotto numbers. That went down like a led balloon.

8 weeks in now (heading into the 9th) and I can see a few of my predictions were off the mark.

Massively disappointed in the Titans… after last year I thought they were destined for greener pastures, but it’s not to be. Only 8 rounds in and already a huge question mark over their finals hopes.

The other 2 Queensland clubs though have been impressive. the Cowboys are really playing some enterprising football, with some stiff defence. The same can be said for the Broncos. Interestingly the most significant changes to those sides were in the Halfback.

Especially in the Broncos case, Reynolds has really turned that side around, they look more patient and knowing that points don’t need to come right away and that controlling the flow of the game is more important. Souths must be kicking themselves, MG was spot on when he said the person at the Bunnies that decided to tell Reynolds he wasn’t in the clubs future plans should “fire themselves”. One of the dumbest moves by a club in some time.

The only real surprises for me so far have been the Cowboys & Raiders.

I had Raiders mid table, and they don’t look like getting anywhere near there at this stage.

I had Cowboys bottom 4. While I’m still not convinced they will be near the top at the end. I think they will at least be mid table now.

The $50 bets I had on the Knights to get the spoon, and the Broncos to make the finals are both looking good at the moment.

Like many others, I had the Cowboys and Raiders reversed.

I thought Madge would be first coach to go , I reckon now that Ricky has only a couple of weeks left