Tommy Raudonikis, perhaps rugby league’s most loved character, has died after a long battle with cancer.

The former Australian halfback and captain was with his partner Trish Brown when he passed away at 7.15am on Wednesday in a Gold Coast hospital, only six days short of his 71st birthday. 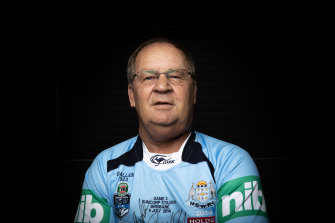 “Tommy Terrific”, as he was known to his fans at Western Suburbs Magpies and Newtown, had been plagued with bad health for nearly thirty years, fighting testicular cancer, enduring a quadruple bypass, combating neck and throat cancer and ailments of the back and shoulders. Yet he fought on until cancer finally did to him what a legion of English, French, and New Zealand players could not.

sad news and he would be considered a relic by todays young but Tommy was as tough as they come and mad to boots (in football terms of course)
sadly many of these guys are slipping away leaving many with wondrous memories of another time.

Would be nice if the NRL celebrated his life in some way but i am content in the memories he gave me.

Would be nice if the NRL celebrated his life in some way but i am content in the memories he gave me.

Great statement SBF and resonates with me also.

What a Champion for our game !

Wests / Tigers retiring the ‘7’ for the weekend all grades as a gesture of
appreciation, respect and honour !

The ‘Pearly Gates’ will never be the same.

My understanding is that there will be one minutes silence before every game this week.

And so there was last night.