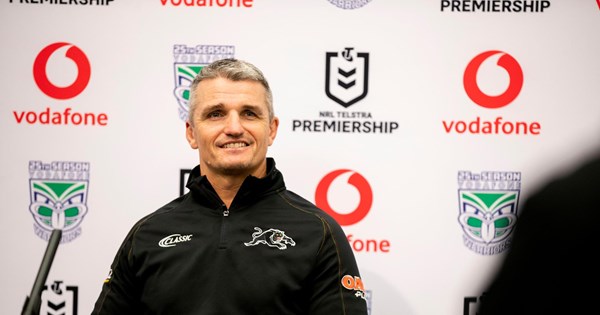 Maloney kicks the Panthers to a Golden Point victory

The Panthers overcome adversity to pip the Warriors in golden point courtesy of a James Maloney field goal. There was plenty of controversy as the Warriors' clash with Penrith went into extra time at Mt Smart Stadium on Sunday with James Maloney's boot proving the difference in Penrith's 19-18 win. 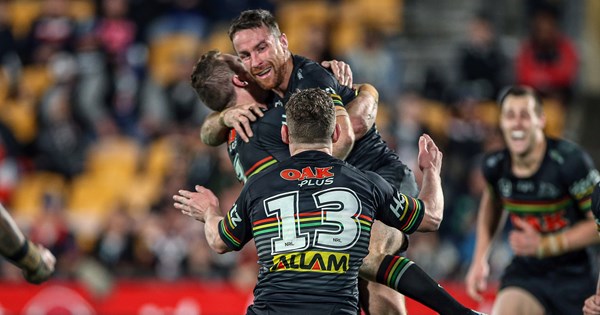 MAN OF THE MATCH VOTING

i see Whare is named on an extended bench but pleased to see Cleary stick solid with the team who have been getting it done save for NC who is out injured
This game throws up a whole different set of challenges as this Warriors team can be awful or brilliant with nothing in between and if they turn up will be hard to hold out but we do have some quality in our side and i think we will prevail.

Question - wouldn’t Malaki have the same ‘opinion’ as DWZ given their religious beliefs?

wondered this myself Kevin.

Then Malakai might just want to stand on his own two feet.

Or isn’t wanted by anyone else so needs to keep his pay check regardless of his religion!

… justice was served my friends, belong/believe.

But we got the lollies and don’t know how we did.

Why can’t or isn’t Luai taking on the line…what is it with this skipping across field???

The kid has speed to burn off the mark and today he had lazy and tired forwards he could have exposed…Malony was trying to do it and almost did and he doesn’t have the speed of Luai.

Warriors should have won that game easily considering the ref calls/penalties but somehow we fashioned a win.

Kiaku looks like he is not 100%…and hope Naden pulls up ok as he looked hurt as well.

Be nice if they could actually combine execution with our hunger

we have the bye next week and just might have come at a great time for some of our guys.

It would have been a huge travesty of justice had we lost that game.

Thankfully a fully committed team effort, led by Jimmy, who in my eyes should be captain from now on.

With the bye up our sleeves we are knocking on the door of the top 8. Who would a thought it 6 weeks ago?

We showed a lot of character to get up after that refereeing performance. How many sides win after having 2 players sent to the bin? If it isn’t a first it would at least be as rare as hens teeth.

With Naden’s performance today, and on the back of his earlier performances, I’m confident we have found a long term centre option.

With a few players looking a bit worse for wear at the end, it seems the bye has come at a good time. Just have to hope it doesn’t break our momentum.

I’m still processing what exactly I saw on Sunday.

I thought the Panthers came out of the blocks really well, they kept the Warriors starting their sets deep in their territory and they we commanding the field position.

Then the Warriors capitalized on some penalties and got over the line. I figured that was an anomaly and the Panthers would get back to their feet.

Then Martin got sent off, Malony swears blind that he wasn’t warned about the penalties to which Sutton replies “I don’t have to warn you” which is certainly a break from the norm in 2019.

Things started to get real weird when Luai was sin binned for something that on evidence presented never happened, the Warriors were then gifted a try that wasn’t a try.

I was getting a bit dejected. It was looking like this game was slipping away, down to 11 players and they looked tired. At this point I couldn’t blame them for giving up. The referee had made it clear that it wasn’t Penrith’s day and a loss was most likely to follow.

Somebody didn’t communicate this to the boys on the field. Through guts and determination they got back to the job and put the squeeze on the Warriors who were content with holding onto their slim lead (kicking the ball into touch with 20 minutes to go and 4 points up is a bad idea and a real white flag moment).

A lesser team would have given up, but this team rallied and pulled a win from the jaws of defeat. If this is the attitude the team plays with then they will go far.

I said earlier in the year I would wait till mid season on my opinion on weather the Panthers season was over, my friends, this season is very much still alive.

I thought the Warriors were afforded too much latitude in getting off the tackled player in the first 15-20 mins. Soon as Penrith decided to follow suit
they were pinged for it. If the refs are going to lay down the law to establish
some discipline it’s gotta be a 2-way street. There is also a huge discrepancy in terms of quality between ref 1 & 2. If they’ve got VAR why do they need 2 ref’s?

That was borderline cheating. I would have liked IC to go Beserk in the presser even though he won…

We got the 2 points, let’s move on

That was borderline cheating.

This is what I was trying to process. Was it my rose coloured glasses or was this bordering on cheating.

I don’t think it would be fair to say the Warriors cheated, but the refereing was with either grossly incompetent or the referee had an axe to grind against the Panthers.

I would gladly chip in something for the fine if Ivan feels like having a spray at the NRL.

NRL head of football Graham Annesley has conceded that the send off call against Jarome Luai and the Warriors try of which followed were incorrect. NRL head of football Graham Annesley has conceded match officials made some serious errors in Penrith's extra-time win over the Warriors on Sunday, including Panthers forward Liam Martin being allowed to return early from his stint in the sin bin.

cold comfort indeed and there was the “hidden” sting in Martin being allowed on the field early.

isn’t a Sin Bin controlled by a NRL Official who is the time keeper and allows or restricts a player from entry to the field until their 10 minutes is up?

In short every official at the game stuffed up

So what if Warriors had of won with these admissions?

On a side note did anyone watch the ref in the Canterbury Cup game with the Panthers?

Some observations –
When Annesley comes clean with the NRL mea culpa today, did you notice how he not only started with the Liam Martin 90 seconds issue, but he gave it so much airtime? It was as if he was making a point that Penrith also benefited from the match official errors, despite that 90 seconds being insignificant when compared to the other three blunders.
Penrith showed extraordinary guts in digging in for the win. But if we hadn’t won, the apology would have been worthless. The same happened a year of two ago at Penrith Park when the East Rorters grabbed a victory on the death via a forward pass, a pass that was so far forward that, again, the NRL apologised. Of course, the 2 points stayed with the Rorters.
We are walked over repeatedly, with no repercussions. It has been ever thus. Ivan is too nice a person to make a song-and-dance about it, but how long can he remain timid. The big end of town, the privileged, clearly expect us to suck it up, to just lie back on think of England while we are being royally screwed.
And wasn’t there a decision earlier in the season to award a no-try to Penrith (was it Egan from dummy half) that was accorded by the TV commentators as a candidate for the worst decision of the year?
Another topic is the short kick-off. Is there any side in the NRL who are worse than Penrith at defending a short kick? You can almost hear the crowd at Penrith Park calling out to watch for the short kick. Yet when it comes Penrith seem totally unprepared. Why wouldn’t you put your tall jumpers, with support, in the short kick zone, at such a crucial? This seems to have been de rigeur for decades, and we never learn. Go figure.