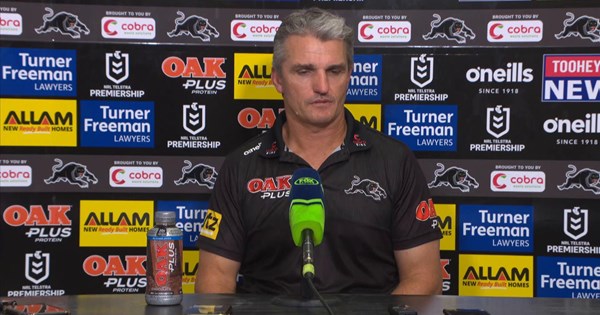 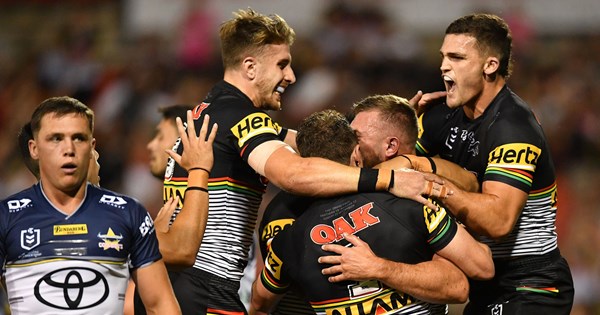 The Panthers kicked off their 2021 NRL campaign in style, cruising to a 24-0 triumph over North Queensland Cowboys at Panthers Stadium on Saturday night. 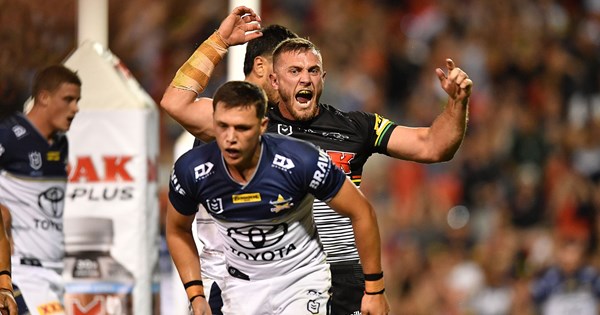 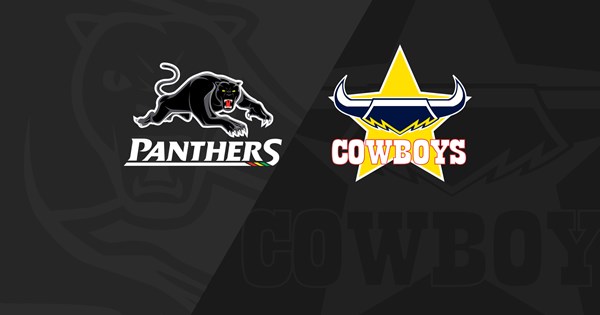 I am looking forward with interest at the naming of squad for this game. Whilst most positions are of course set, it will be interesting to see who is named at R/C (with Naden sitting out for a few weeks) & the bench makeup.
I am not convinced that May is a good option in the centres & expect him to our usual #14 for the season. Whilst he has some skills, clearly the halves are set, and the display of Falls & Salmon on Sat were very good, and of course there’s Burton.
Anyway, plenty of options & that’s why IC gets paid the big bucks

Re #14 …
sometimes I reckon having ‘utility’ value works against you.
Technically your ‘real’ skill set is quite frequently diluted.
You’ve become ‘2nd’ pick. So, what do you do ?
Work your arse off to be first choice, or cop it sweet.
In this case he’ll play where he’s put. I’d put him ‘May’
in the shed. There are other likely candidates on their way up
we should assess with a cameo appearance in the 1st’s.
The next utility and so on an on !

May is no centre !

what time do the teams get named?

Most teams have been named at 4…not us

looks like new chum Momirovski got a gig in the centre’s
and Mr Walkers #14 is somewhere else.

Officials have been added.

i agree in this “utility” notion and with May, yes he has some skills but ask yourself would be be in the starting 13 at any club?

I would much prefer to see a player on the bench who can change the game either through monster defence and or game breaking blistering speed or attacking options.

35C forecast on Saturday in the west which will surely have an impact on the game and even the crowd.

Make no mistake the Cowboys will be up for this game.

Make no mistake the Cowboys will be up for this game.

This will be the case for us, every team, every week !

There are NO excuses for us, for not being “up for the game” EVERY GAME !

Hey Kevin, with a ‘blistering’ forecast do you think Martin should start
ahead of Kikau with the big fella to come on fresh for the 2nd half ???

No - This will be a test of stamina and endurance, they can exercise all they want in pre-season, a hot humid day for the first round clash will show who was putting in the hard yards and who actually NEEDS the run, I’m guessing Kikau will need the run…as he did as late as round 20 last year, is it just me or does he burn out early?

I would simply have my best team starting round 1 and IMO Martin is better than Capewell.

High level of anticipation waiting to leave for the game.

Can’t believe it’s been three years since I have got to a round one game.

The heat will test both sides. I say it year in year out, why don’t we persist with a white strip for the hot days in March?

Its hard to believe you win 24 nil and we were less than good.

Its a start albeit without the sparkle.

Our edges looked clunky in attack, but given they were new combinations I will forgive them for now.

I think we still need another quality prop. I’m not too sure about Leota starting, and I don’t think Leniu or Eisenhuth are up to it yet either.

Panther Pride Man of the Match has been added here.

Given it is round 1, the short pre-season, new combinations and the heat I think we did pretty well. Plenty of work to do moving forward and round 3 against the storm will be a great gauge to see where we are at. Great games by Yeo, Edwards and To’o. Good to see a big crowd and even better to be able to watch live games again.

Didn’t see anything too exciting from Burton in Reserve grade but I think we should look at starting him somewhere against the Dogs just to rub it in a bit.

A good result against a team that barely showed up. The scary thing is it felt like we barely got out of first gear most of the game.

Defense was rock solid, and our spine and forwards were firing fine. A few issues with our centres in attack, but defense and effort were hard to fault.

A couple of players - Kikau and Crighton showed questionable vision at times, with Kiks turning inside when the line was clear ahead of him, and Crighton taking on the line with his winger unmarked on the outside.

I’m sure they will be watching the video on those bombed chances.

I wonder if it would be better to start Kiks from the bench if we are limiting his minutes early in the season?

Also on that subject, I understand the need to limit Api’s game time, but think that Kenny would be a better bench option if we are doing so. Not that May was bad by any means, but Kenny offers so much more from dummy half, and could equally play back row or even in the halves at a pinch if need due to injury.

All in all a good result an outcome for a round one match, and was great to be part of what seemed to be a bigger crowd than the 14k official figure.

It’s along season ahead, and while we still have improvement, we are staying from a strong foundation.

Just watched the extended highlights on nrl.com and I reckon we are in for another good year. Those two wingers are going to score a shed load of tries if last night was anything to go by. Sauce will not be forgotten but I don’t think he will be missed too much.