* NSW Cup and Jersey Flegg fixtures are to be played at Bluebet Stadium, Penrith on Saturday 17th April. 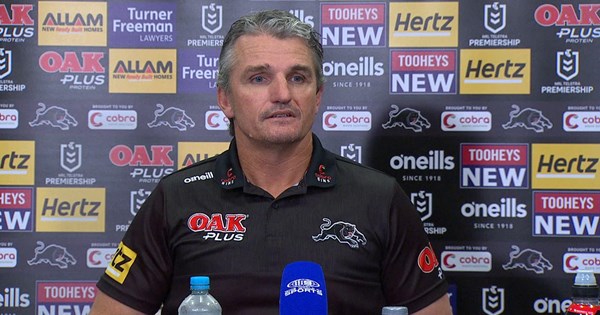 A two-point field goal from Nathan Cleary and some Jarom Luai magic gave the Panthers a 20-12 win over the Broncos at Suncorp Stadium on Thursday night. 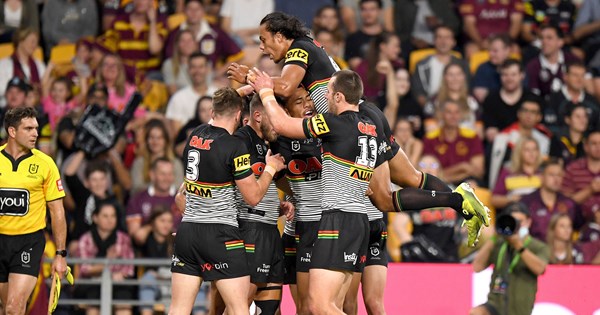 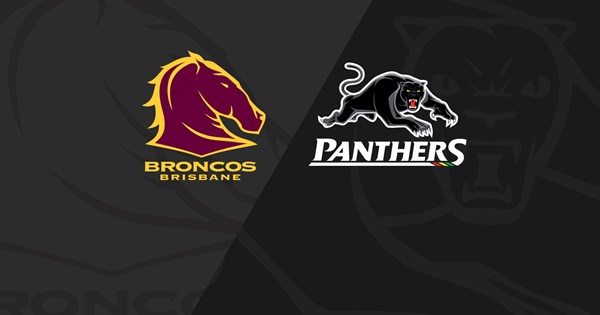 Wow… juts had a quick glance at the odds:

Bookies are smelling blood in the water… going to be a bloodbath.

I hope that our team don’t read that. Complacency has killed many a team’s chances, and momentum in a game can be hard to reverse.

Team Lists and Match Officials have been updated here.

After Lodge’s claim that the Broncos are as talented if not more talented, I’m hoping our boys are keen to prove him wrong in a very big way.

This is another perfect opportunity to play our stamina game, kick on the 3rd regularly and just keep turning them around, keep the ball in play so no let ups, they will fade badly with 20 to go and we can run up a cricket score on em.

NSW Cup team reveals Naden is back and (new chum)
Eddie Blacker is on the bench for his debut.

This week, i have never seen such an orchestrated campaign from almost everyone against our squad.

Herein lies the risk, its an onslaught of “white noise” and i am sure IC has spent some time on this with the squad and lets hope he has got them grounded and especially for this game

Broncos are and have been terrible so far this year despite a new coach, but at some point and in some game they will turn up.
Indeed they have in a few games but faded badly when the tide turned.

That being said, that only applies if we are focussed and don’t take this mob for granted and just expect to get the outcome

We will have to fight for this win.

I want to see us execute a game plan with precision tonight, no dropped balls and poor completion rates like last week.

Lets just play footy boys, get the job done and get home with no injuries and or anyone on report.

Crichton needs to lift tonight and holds the key for us.

I disagree with the Crichton comment SBF in the fact, he doesn’t hold the key for us. Yes we would all like to see him ‘lift’ and by that it is only his handling and at times decision making. His effort IMO is not in question.

I 100% agree that we need to play to a game plan, if we think we can just turn up it will be difficult to control the game. Like I said, I would like to see us win this one with early stamina as our core effort area, these Bronco’s are nowhere near our physical/fitness levels and we should exploit that.

I agree that this is potentially a danger game, with all the white noise around, and an opposition that hasn’t been performing in last couple of years. With a young side it would be easy to get distracted.

On the other hand, I think that last week was our worst completion rate in 2 seasons, and doubt we will be anywhere near that poor again. If we complete at our normal rate, we should win comfortably.

If we’ve survived the Raiders early onslaught and fought back accordingly we can only beat ourselves v Broncos.

I’m confident we won’t fall for any ‘horsy’ shenanigans and get the job done as a team with our talent should. If we can’t account for the teams
at the lower end of the table how in hell do we expect to deal with the upper echelon. The Melbourne game almost undid all the good work
except for the ‘hand of Kikau’ who is flirting with ‘god’ like status at the foot of the mountains.

I agree that the Broncos tactic will be to hit the Panthers hard early. I think they know they won’t outlast us so the best tactic is to try to put on as many points in the first half and try to weather the barrage in the second half. The second tactic they will try is to slow the game down and frustrate the Panthers as much as possible (mush like the Raiders) and try to get the Panthers to be off their game.

I trust that Ivan probably knows this is what will happen as well, but after the Raiders game, they will be sure to have trained for these tactics to be employed by the Broncos as there were effective last week.

I feel the first 15 minutes will be a real fight. But ones the team settles into the game, I think they will start to work the set plays and choke the Broncos or position and possession. I feel we could steamroll them. Would not be surprised to see 50 (or even 60) put on the Broncos.

In summary from all of the above, if a team doesn’t do the basics right (pass, catch and tackle) then any game can be lost. It’s hard to imagine that IC wouldn’t have covered all bases, including the mental side.

I guess the mental preparation for every game will get us nervous from this a point in.

The commentators are certainly naming us premiership favorites, with articles such as “ who will be first to beat Penrith”.

We have the team, the stamina and the skill to earn that mantle. The challenge here in will be keeping us grounded and to the task at hand.

As was mentioned above, never forget getting the basic right. Turn them around often, wear them out, the. And only then let the dazzle dazzle begin.

There was a period during Anthony Griffins reign at the foot of the mountains where we were regarded as the comeback kings. So for me
the razzle dazzle might be great to watch but I figure NRL is an 80minute game.

Well, Brisbane is sure here to play.

I hate to say it again, but Crighton is the weakest link.

I’m hopeful we can come back

This is all round poor from Panthers. The forwards look tired. Momirovski doesn’t seem to know he has a winger outside him. We’re just going through the motions. We need to regroup and lift our game, now.

Credit to the Broncos, they have turned up tonight. I question the last pass on their second try though, looked forward to me.

Regardless, we need to lift if we want to make it 6 in a row.